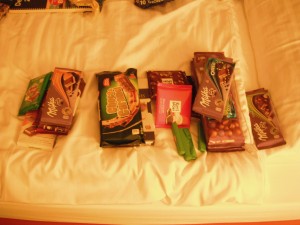 Part of an occasional series about chocolates I have eaten.

I have been asked if we tried any new chocolates on our recent travels, and I think anyone who knows me knows the answer to that question.

The photo to the right was taken our last night in Germany before we flew home. It is part of our chocolate haul that we imported to Jenworld. The largest bars were huge and heavy — 250 grams, which translates to nearly 9 ounces, or over a half pound per bar. My estimate is that we had 5-10 pounds of chocolate in our bags and our plan was to buy more at the Frankfurt airport the next day. A plan that went awry, due to various snafus and miscommunications, so we were unable to burn through our remaining Euros in Duty Free.

I am a huge fan of chocolate and marzipan, and my hope was to eat a lot of chocolate + marzipan while in Germany. Specifically, I wanted to get my hands on some Niederegger and buy about a metric ton of the stuff. Seriously, I packed an extra duffel bag just for this purpose.

And guess what? We did not buy one gram of Niederegger. Warum? Because we never once saw it anywhere, even though I know for a fact that it hails from Deutschland. We looked in every convenience store we were in, three or four different supermarket chains, upscale chocolate shops, and the Frankfurt airport. No luck. I have no idea where they sell Niederegger in their homeland.

Quick side note about German convenience stores: Whereas American ones sell a wide variety of artery-clogging salty and fatty snacks, a slightly lesser amount of chocolate, an even lesser amount of healthy foods, then a full array of caffeinated beverages, the German ones sell a massive amount of chocolate, a very tiny amount of salty snacks, some sodas, plenty of beer, to-go milk, and then the interesting combo of wine, liquor, and condoms all together in one area.

Getting back to chocolate, if Niederegger was the elusive yeti, Milka was the fecund deer. It was everywhere. Thus it was that were able to try a wide array of flavors. Any time we stopped to get gas or buy groceries or just walked by a place selling chocolate, the girls and I were all over the candy aisle like a pack of dogs on a three-legged cat. It got to the point that we were having dessert after all meals, as well as dessert after snacks.

Ritter was another chocolate we tried a lot of. I’m sure you’re familiar with it, as it’s something that can be easily found here in the U.S. We had dark chocolate with marzipan, chocolate with whole hazelnuts, and more that I can’t remember now.

We picked up some Mister Choc, which appears to be found only at Lidl grocery stores, which are whatever you call the opposite of an upscale market. And, on a related note, absolutely nothing about this brand or its products stand out in my mind, in terms of flavor or taste.

I bought one bar of vollmilch schokolade mit apfel-buchweizen (milk chocolate with apple and buckwheat) by J.D. Gross, but haven’t finished it because it was so sweet that it actually made my teeth ache.

We also saw this at one of our last chocolate forays:

No, we didn’t try any and not just because those pictures on the box are rather unfortunate looking.

So that’s the German part of our chocolate adventures. Lots of chocolate, lots of interesting flavors.

In Italy, however, things were a bit different. We saw fewer Italian chocolate options, other than Perugina, as well as plenty of of Kinder Eggs and other Kinder products, which are made by Ferrero, an Italian company. We had assumed that Kinder chocolates were German, as kinder means children. The strange thing is, we saw more Ferrero products in Germany than we did in Italy. I was also surprised to learn that Ferrero makes Nutella, which we also assumed was German-made.

Here’s one bar we tested out:

Again, this tasted too sweet to me.

What we did eat a lot of in Venice was gelato.

We ate a lot of gelato in 60 hours. Probably the equivalent of two gallons. That stuff was amazing. Uh-may-zing.

One other place we ate chocolate during our travels was in Ljubljana, Slovenia. We stopped in a chocolate shop for a small treat:

I forgot to take photos of our purchases and can’t remember what we tried, only that everything was delicious.

So that’s a belated post about our chocolate adventures on our last trip. And now I’m feeling like I need to go back to Germany just to have a Niederegger safari to hunt down the elusive beast.