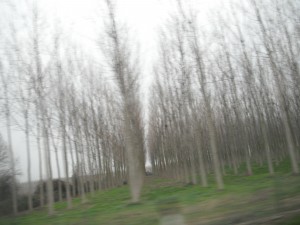 Just northeast of Venice, we passed numerous groves of trees that were perfectly planted in grids. We have no idea what the trees are or why they are planted this way.

Guten Tag! We are back in Germany, after a long day in which we were in four countries in seven hours.

We started off by leaving Venice around noon. Our destination was Munich.

We had two ways to go: Back the way we came or via a slightly longer eastern route that would take us through Slovenia.

Is there any question about what we did?

We chose the latter option, because why not visit Slovenia if given the opportunity? Okay sure, the girls and I had to ask several times what the name of the country was that we were headed for, but we are so glad we went.

The lovely Slovenian countryside, as captured from a car.

The capital of Slovenia is Ljubljana, and it is absolutely charming.

Yes, that's a castle on a hill overlooking the city. On a totally unrelated and definitely shallow note, feel free to admire my new bright red Italian purse.

After that pit stop, we were on to Austria and then Germany after that.

Random tidbit: At the edge of Slovenia, nearly to Austria, we went  through a mountain tunnel that was 7,864 meters (7.8K) long. Halfway through, we passed a sign that welcomed us to Austria. Later on in the drive, we passed through a tunnel that was the highest one in all of the Alps — something like 1,900 meters, although I cannot now remember the altitude.

The start of the Alps in Slovenia -- partly obscured by clouds.

You know what made this drive possible and actually fun? GPS. The rental car has a built-in nav system and it is the bombdiggity. The GPS has totally saved our tourist butts numerous times, including helping us find an ATM (when a B&B wouldn’t take credit cards), grocery stores, the train station outside of Venice, and more.

We set off from Venice today with no map coverage of a large chunk of our journey, so there’s no way we would have felt confident enough to drive through Slovenia, but the car’s GPS got us to the old town in Ljubljana, and then to the front door of the flat in Munich with absolutely no problems whatsoever.

Pete and I are total map geeks and have long scoffed at over-dependence on GPS, but now we’re starting to come around on the concept.

We got to our flat in Munich around 8:30 and let me tell you, if New York is the city that never sleeps, Germany is the country that is often asleep. If you are looking for a grocery store or convenience store that’s open after 8 p.m. in this country, you are Scheiße out of luck. We had already had difficulty finding comestibles on a Sunday when we were in Füssen, so now we know that evening hours just don’t happen in this country. Pete was out until well after 10 p.m. trying to find something for us to eat.

So that’s the story of our long, long day of driving. Tomorrow, we’re leaving the car parked and doing lots of walking instead.