If the story of our vacation was being told in book form, the subtitle would be Eating Our Way Through Ontario and Quebec, because there was been a whole lotta eating in the past week-ish. 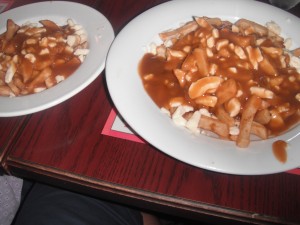 First off, there’s the poutine. Y’all know that Pete and I jones for poutine. Naturally, we dove in head first when we got to Montreal and damn near drowned in the stuff. But that would be a worthy death, I think.

We went to a place called Poutineville, which offers a kajillion poutine options, including customize-your-own. If you ever have the opportunity to eat there, do so.

The first night, Pete and Grace went with the traditional version (fries + cheese curds + brown gravy), while Ellie went with fries + chunks of roasted chicken + peas, and I had traditional + chunks of filet mignon + peas. The peas kept it healthy, yo.

The next night, Ellie got the same thing as the night before. Pete got classic poutine + chunks of braised beef. Grace got fries + cheddar cheese + crispy bacon (what we Americans call Canadian bacon). Mine was sweet potato fries + curds + crispy bacon + peas + a cheese sauce. (Still keeping it healthy with the peas.)

We were totally planning to go back for a third night, but someone ate poutine leftovers for breakfast the two mornings after and said he was a little tired of poutine. And that was the end of our poutine adventures. Luckily, we brought cheese curds and jars of gravy home with us, so I’m pretty sure we’ll be eating poutine for dinner again sometime very soon.

We had been told to swing by Juliette & Chocolate and boy were we glad we did. This restaurant specializes in chocolate, chocolate, and more chocolate. Crepes, pastries, ice cream, brownies, and drinks, plus there were savory options, including chocolate vinaigrette dressing drizzled over a salad.

We went mid-afternoon because we needed a little pick me up and it worked. Ellie got a chocolate trifle, Grace got a crepe, Pete had a chocolate drink, and I had the profiteroles shown in the photo.

On our third day in Montreal, we finally found some fresh cheese curds and that pretty much launched a cheese curds binge that continues unabated. As soon as we rolled into Alison’s town, we went to a grocery store that we knew carried them and stocked up. And we stocked up again before we left. I think we went through three or four bags last weekend, plus we snacked on them in the car during the long drive home. And there’s more in the fridge right this very moment.

When we were at Alison’s, we went to the farmer’s market and got bacon on a bun, which is a local specialty. You can choose which kind of bacon you want (various cuts, but they were basically fatty American bacon and thick-cut Canadian bacon), and if you want one or both kinds. You can also specify if you want your bacon extra crispy. There are other toppings (egg, cheese, a slice of tomato) too. I highly recommend you go with two kinds of bacon cooked extra crispy, with egg, cheese, and tomato. Again, the tomato is keeping things healthy.

The best buns in town. Not pictured is the award ribbon that certifies this awesomeness.

And then Alison fed us a never-ending stream of amazing foods, including grilled BBQ ribs, Tex Mex on the Thursday night we arrived, and her cinnamon buns. Alison’s cinnamon buns are award winning — she has the winner’s ribbon to prove it — and are damn tasty. Good luck trying to eat just one.

On our last full day in Ottawa, we took the girls downtown for beavertails. Beavertails are a Canadian pastry that is 12,000 calories of awesome. Supposedly, they are best enjoyed with hot chocolate or coffee after an afternoon of ice skating on the Rideau Canal, but I’m pretty sure these are a year ’round treat. I don’t even normally eat pastries, but I would go back to Canada just to go to Beavertails location in the Byward Market.

Just in case anyone’s wondering, here’s how I handled all that good food and am still able to zip AND snap my jeans: First of all, I went for walks every day — for example, we walked to Poutineville from our hotel, which was 2.5 miles round trip. In fact, one day in Montreal, we ended up walking around six miles total.

I also tried to eat in moderation. The loaded bacon on a bun shown with Gingy was mine, but I only ate half and gave the rest to Pete. I didn’t always hold back like that (hello, beavertail, I’m lookin’ at you), but I tried. I also stocked up on fresh fruits and vegetables every few days and made sure to eat plenty. I don’t think I gained weight, but if I did, it was minimal. Besides, we were on vacation and having fun, and isn’t that what life is all about?

We got back to Jenworld yesterday afternoon and are trying to get back to normal. I’m going to take the rest of this week to get caught up on life and will see you all again next Monday.