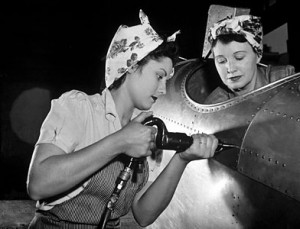 This has nothing to do with my job, but it's a cool photo nonetheless. (Google Images)

So now that I have strung out stories of our vacation for weeks and weeks after our return, how about I tell you what life has been like here at home for the past month?

As I mentioned way back in the beginning of July, 10 hours after we got back from Europe, I started a new job.

Long-time readers might or might not remember when I left my last job nearly five years ago. I‚Äôve been working on freelance projects since then, mostly on a part-time or part-part-time basis. While the flexible schedule has been great for my family, the variable income, however, was not so great.

And the fact is that in two years we‚Äôre going to start writing painfully large checks to an as-yet-undetermined university, followed a year later by writing twice as many checks to institutions of higher education. Oof, that‚Äôs going to hurt.

Facing the possibility of two daughters in college at the same time, Pete and I agreed it was time for me to start looking for something steadier and more lucrative than part-part-time freelance work. After a great deal of applying and interviewing and not getting any offers, I finally managed to score a long-term temporary position with no fixed end date. I have no idea if it will become a permanent position or not, but for now I am focused on settling in and learning, well, everything.

One thing that moved me almost to tears my first week on the job was the unbelievable kindness of people. Some stopped what they were doing in order to help me figure out something. Others dropped by my desk just to introduce themselves and check on how I was doing. A couple sent regular emails to make sure I had what I needed.

As for my people here in Jenworld, they‚Äôve been total champs throughout all this. We had a number of family conversations in May and June about how this job would change things for all of us. More shared responsibilities among the four of us, less expectation that I will handle anything and everything.

For example, Pete and I carpool to work because I don‚Äôt have a parking space. This means I don‚Äôt have access to a car during the day. So at the beginning of the summer, I came up with a detailed list of every single thing the girls had going on all summer and emailed it to Pete, who has been working with them to sort out their transportation needs. It‚Äôs interesting how everyone‚Äôs expectations have changed now that I am no longer available to run people hither and yon — one girl rode the school bus home from summer school, the other girl rode the city bus to and from a day camp, both girls have been more resourceful about carpooling with friends, and so forth.

Cooking, chores, and errands have changed too. While the girls have long had their assigned chores and Pete has always carried a respectable load, the burden has shifted considerably depending on who has more or less time on any given day. For now, and until school starts in a couple of weeks, I leave a short list of chores for the girls to do every day while Pete and I are gone, as well as any dinner prep that might be needed, and they have it all done by the time we walk in at 5:30.

On the weekends, we divide and conquer the chores and errands. Pete does most of the grocery shopping now, although I try to have Grace drive me around for errands on the weekends since she‚Äôs still learning to drive and needs to accumulate more time behind the wheel.

Honestly, with Pete driving me to work and Grace driving me around on the weekends, I could probably go weeks without driving. I could totally get used to that lifestyle.

Overall, I am really happy with how things have gone so far. It helps that my girls are in high school and therefore reasonably independent. They‚Äôve been learning how to cook and clean for years, so it‚Äôs no big deal (to me, at least) to have them doing more. And Pete has always been a committed, engaged partner, so it‚Äôs no surprise that he has stepped up and assumed even more responsibility than he had already.