After we left Rome, we flew back to Scandinavia. We werenâ€™t due to fly out of Copenhagen for a few more days, so we took the opportunity to explore Norway a little.

We flew into Bergen, which is the second largest city in Norway. Itâ€™s set on a peninsula on the west coast with both a bay and a fjord, so thereâ€™s a lot of water. In addition, the city is surrounded by mountains.

We landed in the afternoon, took a cab into town, found our accommodations and dropped off our stuff, and then set off to explore a bit. 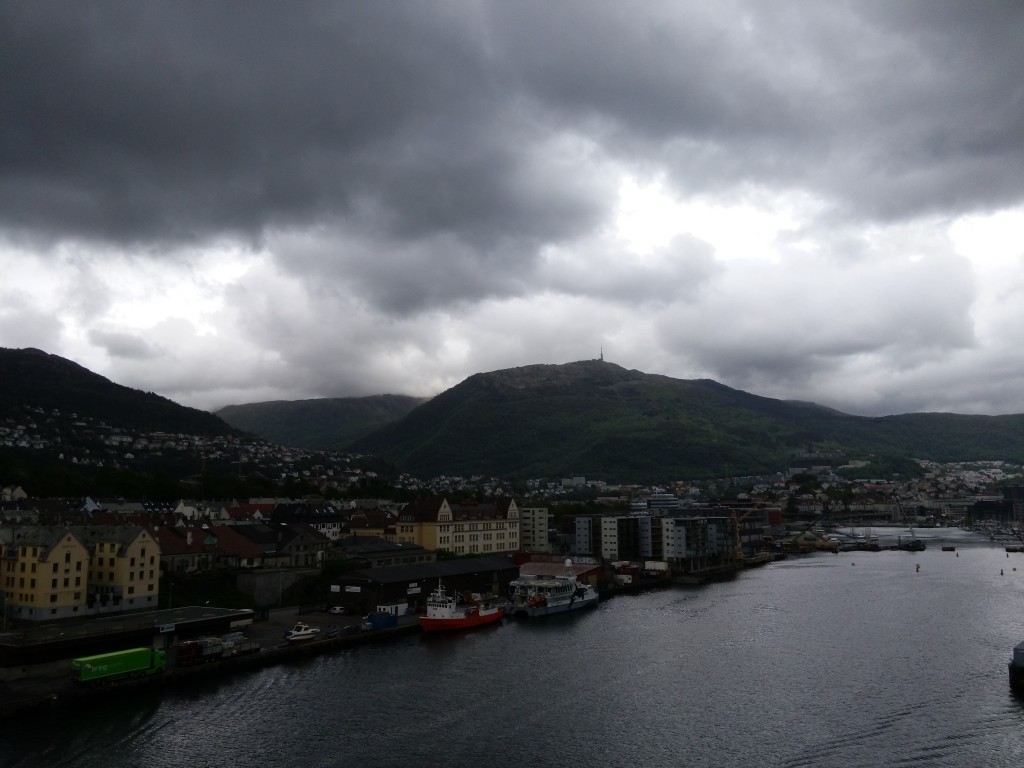 Our explorations led us through a lovely city that is nearly 1,000 years old and has Bryggen, a UNESCO World Heritage site. 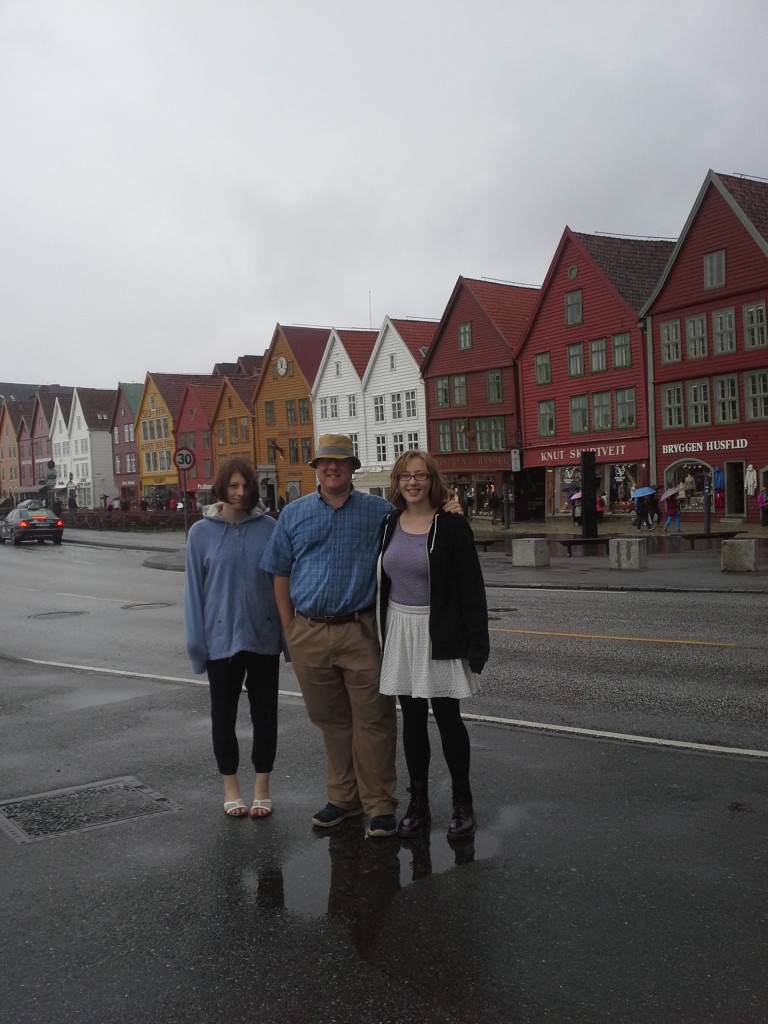 It was rainy and chilly, but we made the most of our afternoon.

The next morning, we hopped on a train to Oslo, which is about 300 miles (465 km) southeast of Bergen. Over the course of the next seven hours, we saw fjords, lakes, rivers, mountains, valleys, snow, green meadows, flowers, and more. 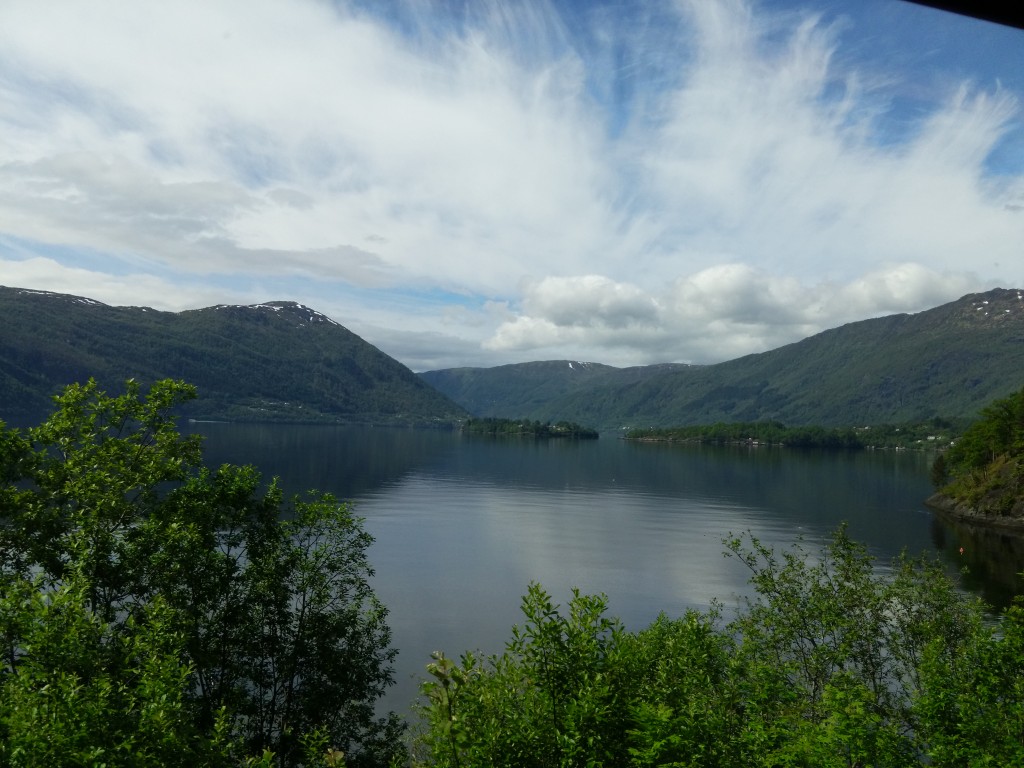 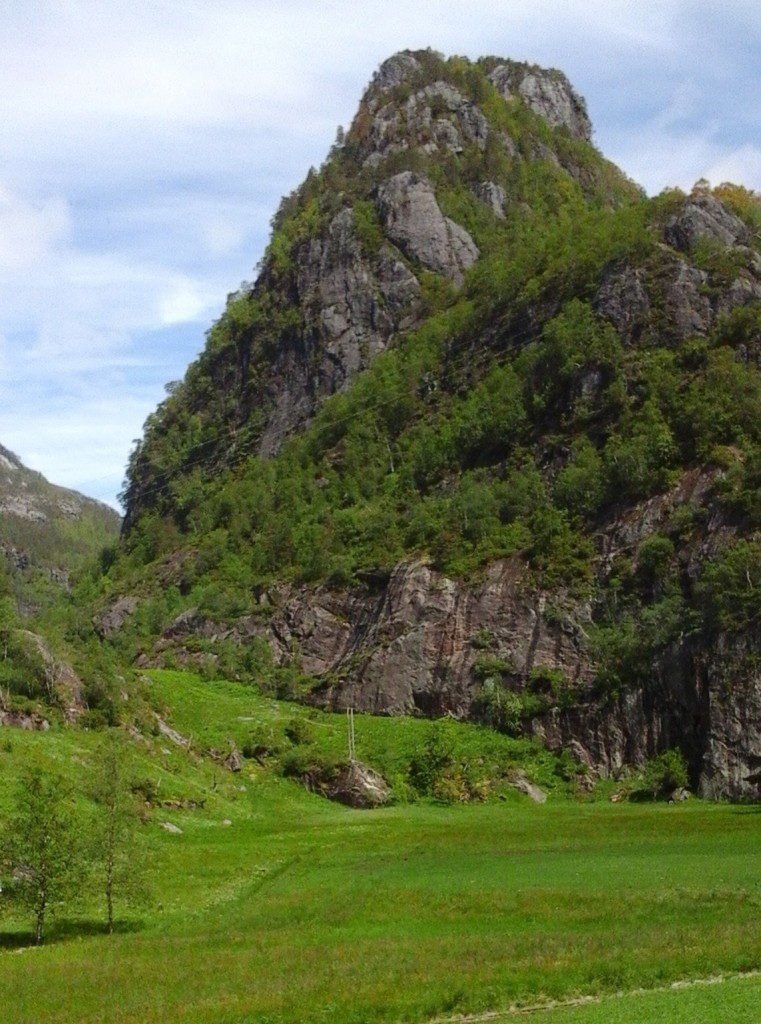 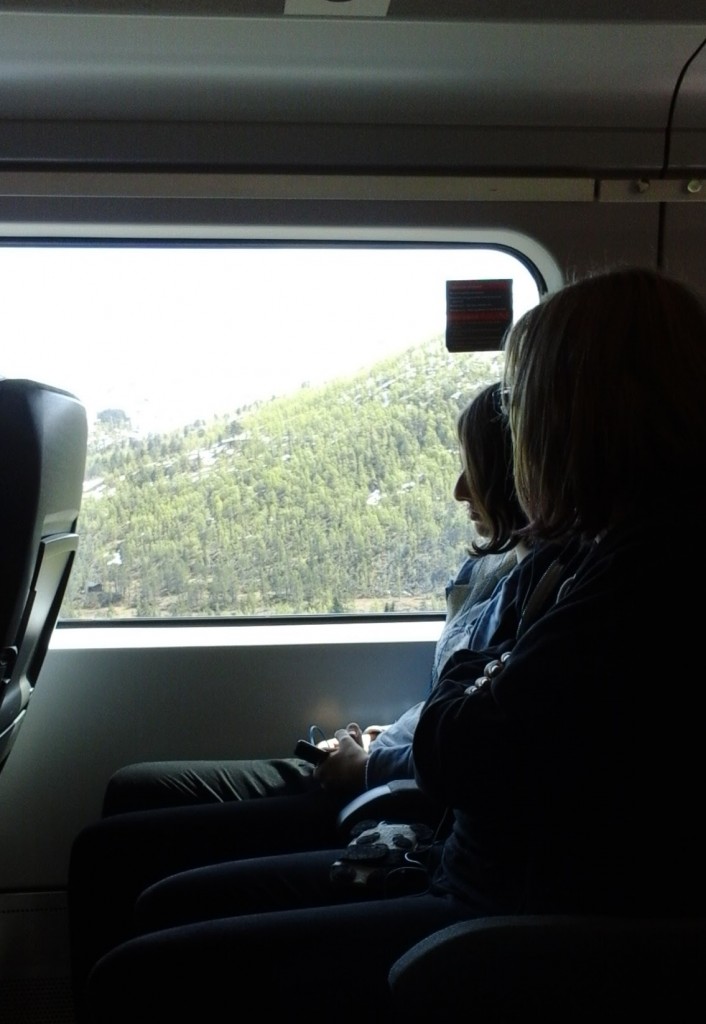 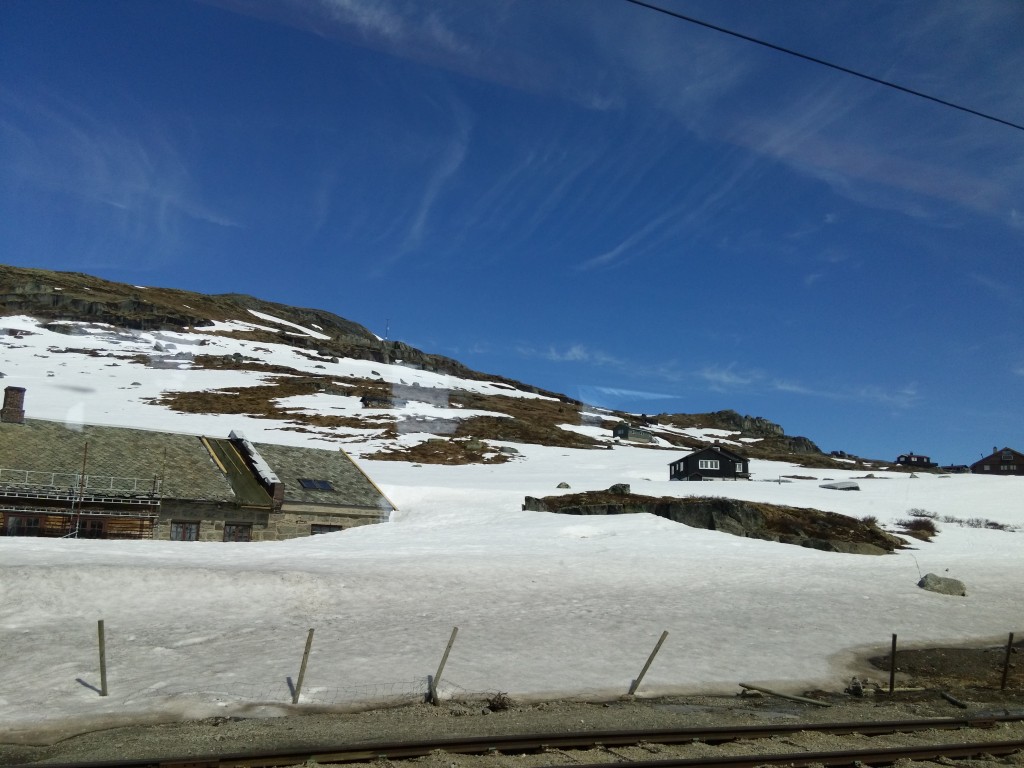 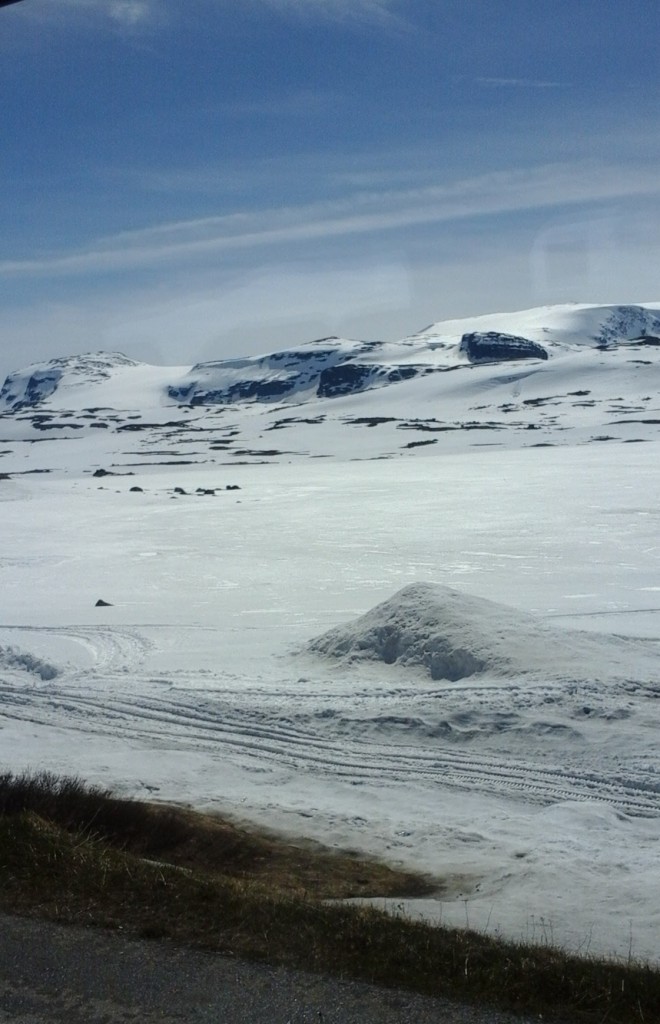 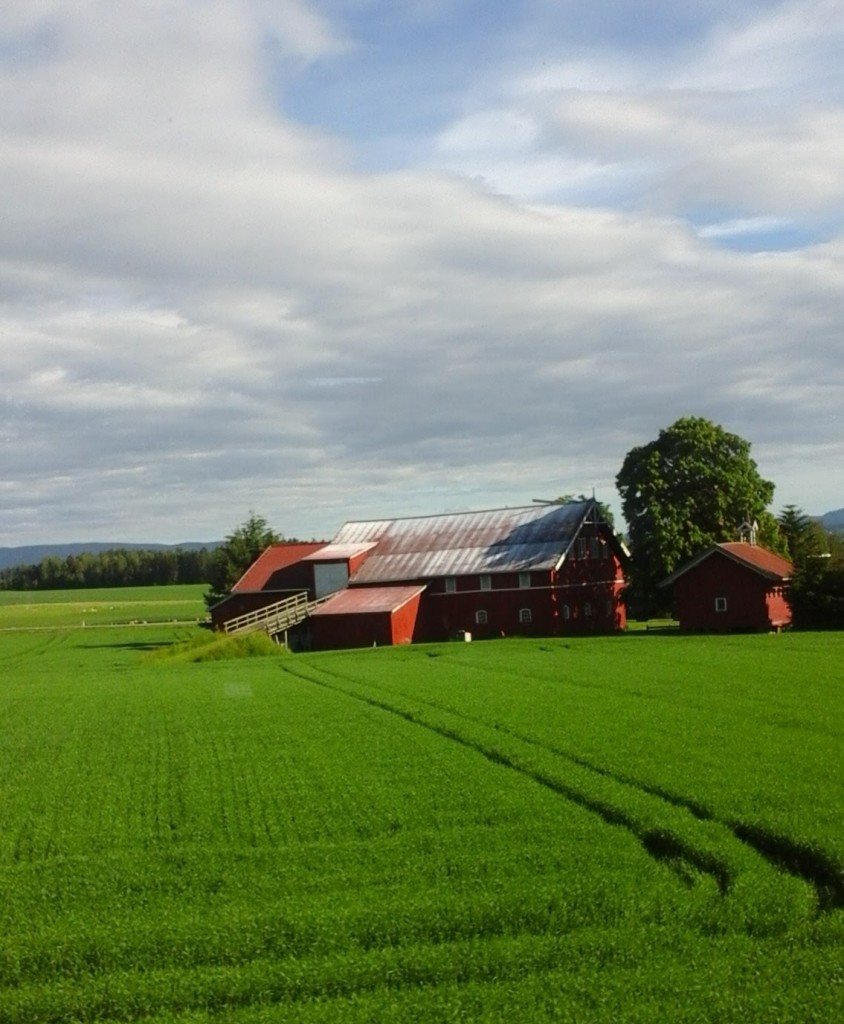 Itâ€™s really a shame that Norway is just so awful, right?

We got to Oslo on that Friday evening.

Hereâ€™s a random piece of trivia: You cannot buy beer in a grocery store in Oslo after 8 p.m. Even on a Friday night. Want to know how we know this? Because we were ordering pizza for take out and picking up a few supplies- but not beer! — at the grocery store at 9 p.m.

The next day, Saturday, we woke up with some ideas for how we were going to spend our partial day in Oslo. As Iâ€™ll explain in a moment, these plans just have a way of changing. 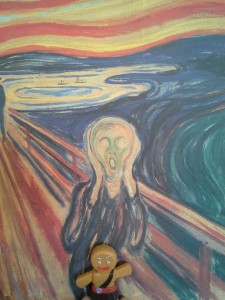 Gingy in front of a poster in the Munch Museum gift shop.

First off, we went to the Munch Museum, where we saw a terrific exhibit on the parallels between the works of Munch and Van Gogh. At the end of the exhibit, we saw one version of The Scream. I say “one version” because Munch created four — two in paint, one in pastel and crayon, and one as a lithograph. If you click on the Wikipedia link above and scroll down, the version we saw was the crayon version on the far left.

After we left the Munch Museum, our plan was to go to the National Gallery and see more Munch, but then we found out that the Oslo Pride Parade was about to start, so we shifted gears and found a good viewing spot on the parade route. 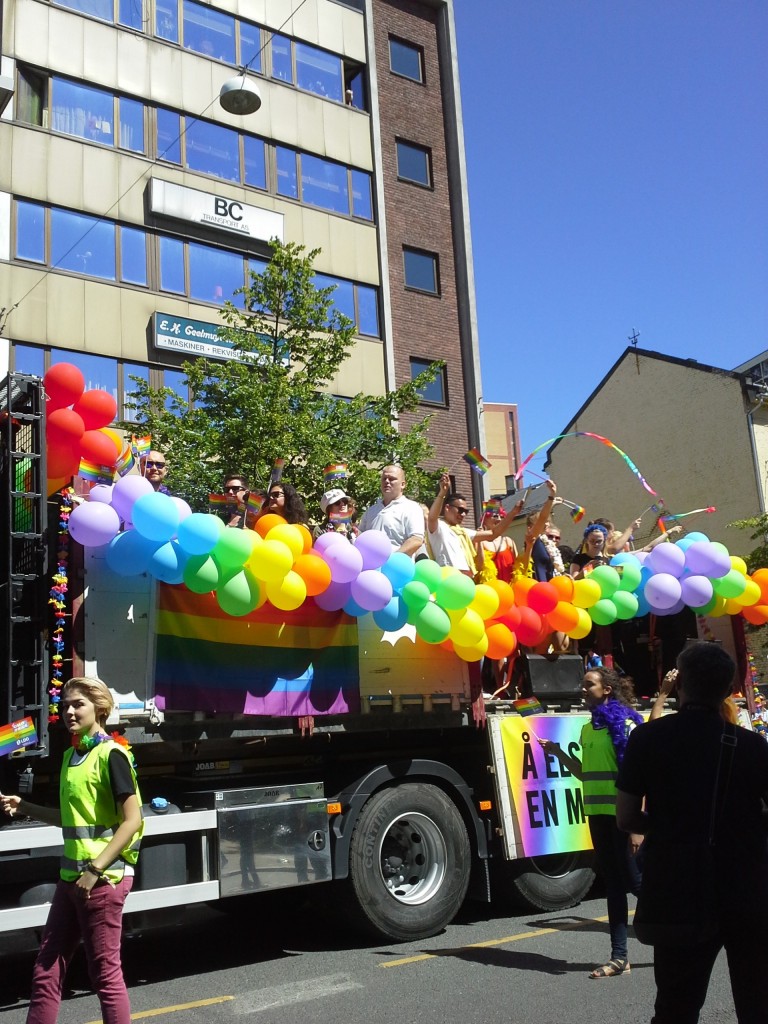 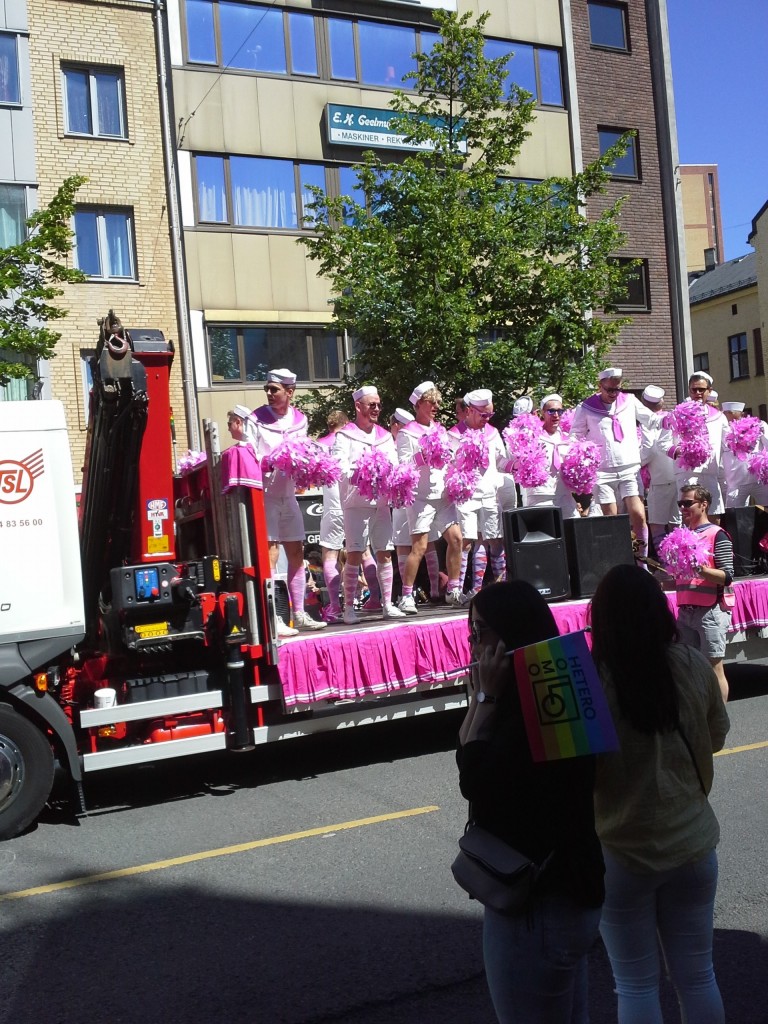 That was our first pride parade and it was SO. MUCH. FUN. So much so that after the end of the parade passed us, we started walking along, slightly faster than the parade was moving, and we eventually saw most of it again a second time.

From there, we wandered to the waterfront of Oslofjord, where we walked by the Opera House. 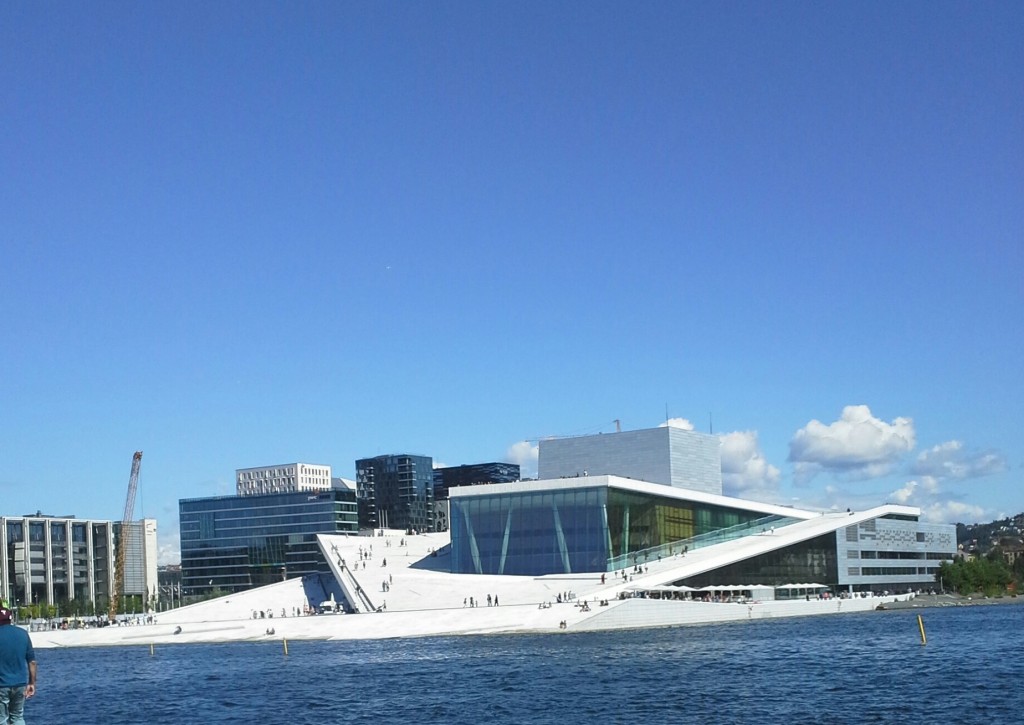 And from there, our day changed radically. We needed to get back to Copenhagen for our flight home in 36 hours. Pete had found out about an interesting ferry/cruise ship that leaves Oslo in the afternoon and docks in Copenhagen the next morning. Given the cost of transportation to fly back to Denmark, plus the exorbitant cost of hotels in Scandinavia, the boat option made a lot of sense for us. 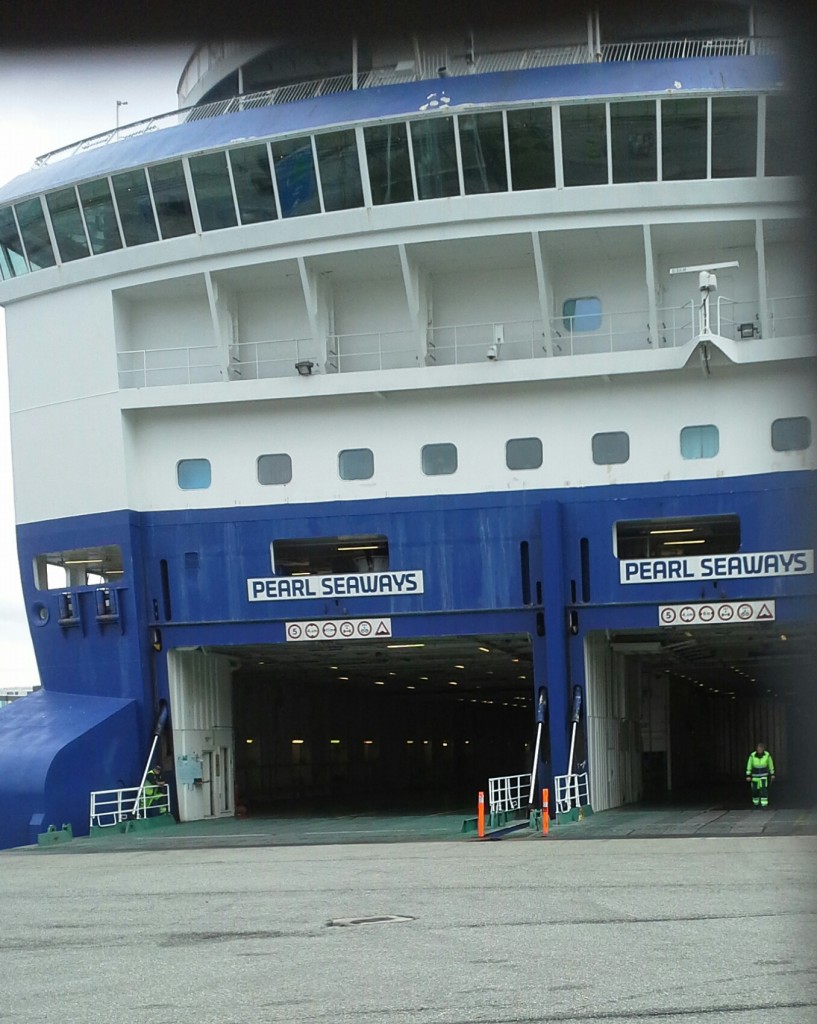 The bays where cars would drive on for the trip across the water.

We boarded the ship mid-afternoon and spent our time exploring. It was smaller than a cruise ship and, while not as lavish as one, was also therefore not Vegas-esque tacky, as my experience has shown them to be. The decor was simple and classic, with beautiful wood throughout.

Our cabin was tiny, but perfectly fit out with four bunks, a wee desk/nightstand, a miniscule closet, and a surprisingly good-sized bathroom. Really, what more did we need for such a short time? 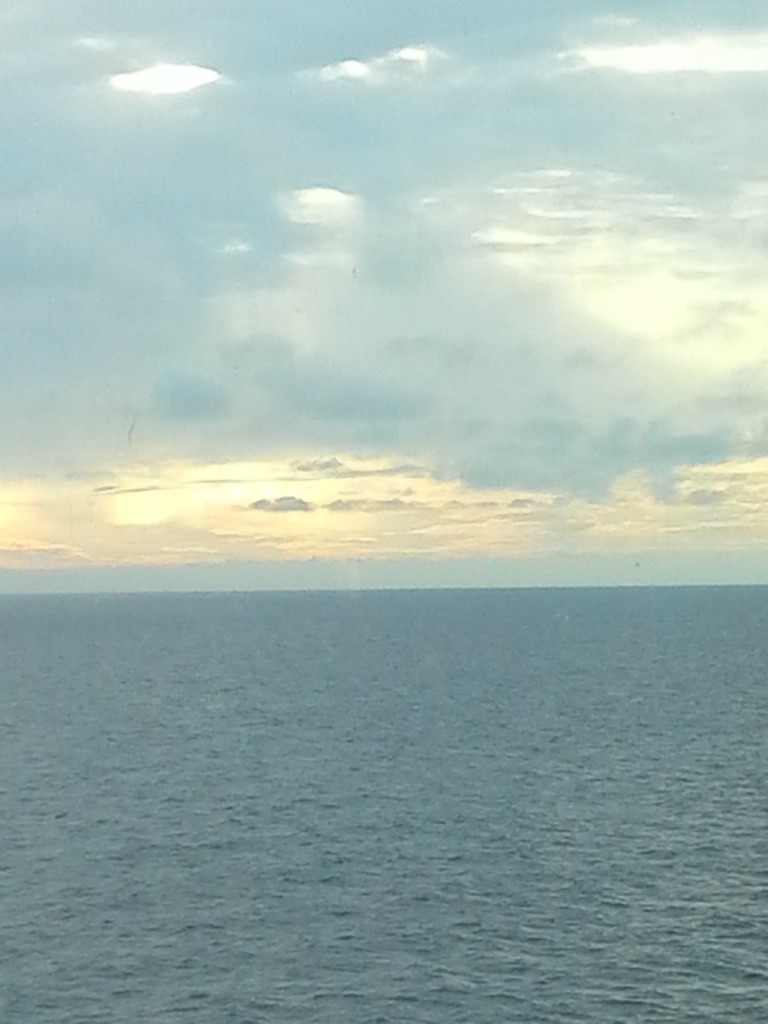 We docked in Copenhagen the next morning with our final 24 hours in Scandinavia before us. We had discussed staying in the city and exploring it a bit further, but instead hopped on a commuter train and went across the water to Sweden, which was a trip of less than half an hour.

We got off in MalmĂ¶, which is truly one of the most charming towns weâ€™ve seen. 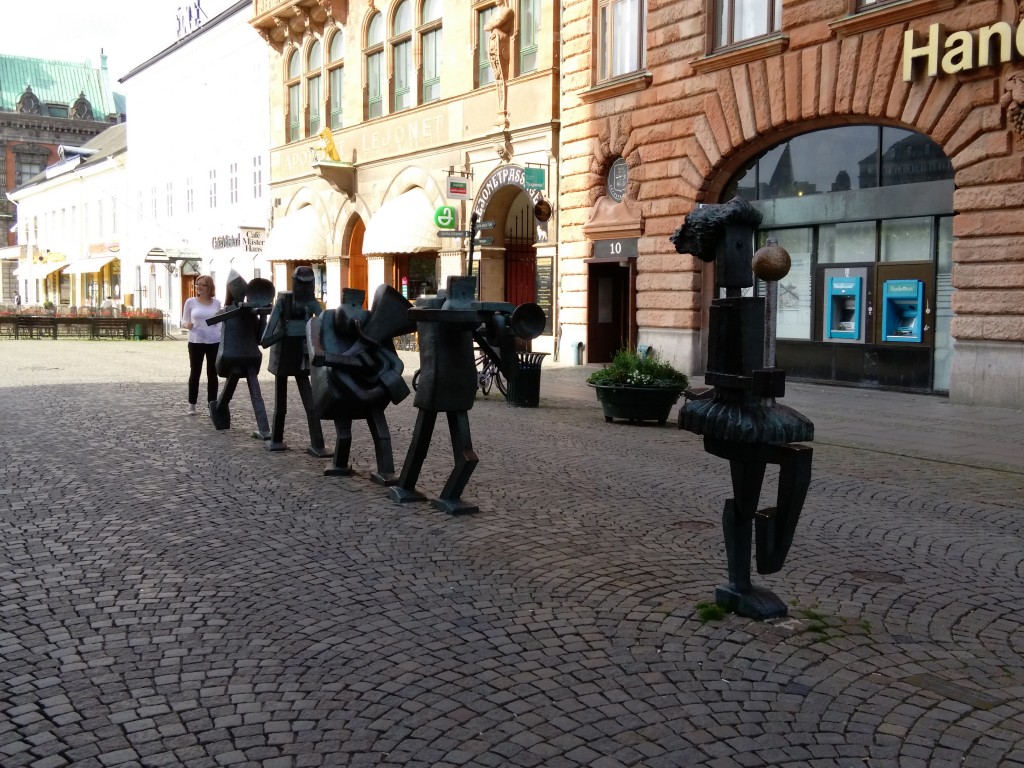 After a pleasant evening in Sweden, we got up early the next morning, walked the half mile back to the train station, rode 20 minutes back to Copenhagen, and got off at the airport. From there, we were in return mode — check in, security, waiting at the gate, and boarding.

We flew to Manchester, England for our connecting flight and encountered some of the least efficient airport customs procedures weâ€™ve ever dealt with anywhere in the world,which is saying a lot. We flew back to the U.S., landing in Philly, which is where we had flown out. I know I swore weâ€™d never do that again, but the airfare was too good to let a little Philly hold us back. This time, we had driven up, so we didnâ€™t have to worry about a connecting flight.

Iâ€™m going to have to write a post about this in the future, but what really saved our bacon when we landed in Philly last month was Global Entry. We breezed through passport control, bypassed the baggage claim area (we never check bags now), and then got through customs quickly too — the whole process was well under 20 minutes.

Within another 30 minutes, we were back at our car and heading south to Virginia. Normally, this would be a five (or more) hour journey, but even with stops, it took only a little over four. We got back to town at 9:30 p.m., made a 10 minute stop at the grocery store (the list was already stored on my phone), and pulled into Jenworld at 10:00. And, as Iâ€™ve mentioned already, the next day started a new adventure.

So thatâ€™s the story of our summer vacation. Over the course of two weeks, we were in seven countries (including the Holy See, but excluding the U.S.), used five currencies (excluding the American dollar), and created countless memories. It was marvelous.

And now Iâ€™m ready to grab my passport and go again.