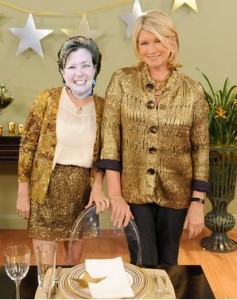 The Martha 'n' me. We've decided to dress all twinsies for the holidays.

My attempts to follow The Martha’s monthly calendar, with its “gentle reminders, helpful tips, and important dates.

The Martha’s calendar for November was surprising for me. I’m going to share a representative sampling of her activities, then tell you what I found to be unusual.

On Saturday the 1st, she planned to plant vegetables in her greenhouse. This does not surprise me. The Martha is always planting something. I, however, can assure you that I planted nothing on the 1st or any other day this month and not just because I don’t have any greenhouses.

On the 4th, The Martha apparently planned to “attend Brand Week Istanbul” and “visit Grand Bazaar to buy spices, bags, and linens.” I’m not going to lie; I’m a bit jealous of The Martha this time. I’ve long wanted to go to Istanbul, and I can only imagine how fabulous a shopping excursion with Her Marthaness would be. The only shopping I did on that day was online and the Amazon experience was probably not at all like The Martha’s Istanbul adventure.

On the 6th, somehow The Martha was back and she planned to “order heirloom turkeys for Thanksgiving.” I honestly cannot believe she does not raise her own heirloom turkeys at each of her homes, having built them all some sort of amazing turkey enclosure from wood she grew on her own property, as well as feeding the turkeys something she grew her very own self. How very unMartha of The Martha.

On the 9th, The Martha planned to “check flour and sugar supply; replenish for holiday treats.” And I am happy to report that I too did this in the month of November.

On the 14th, The Martha was going to plan her Thanksgiving menu. As you all know, I did that too. What surprises me about this is that she left it until 13 days before the holiday. Honestly, I figured she would have her menus set much, much earlier and then grew or raised most of the ingredients.

On the 18th, The Martha planned to “have ice skates sharpened.” Again, I’m surprised that she didn’t do this earlier, such as at the end of last winter before storing all the ice skates — and she probably has dozens of pairs for folks her visit her for impromptu ice skating adventures — until this winter. No ice skates here in Jenworld, but I did sharpen a kitchen knife. Close enough, right?

Also, I would really like to see The Martha nail a triple salchow. She could, you know, because she is The Martha and she can do anything.

On the 24th, The Martha was going to polish the silverware to be used on Thanksgiving. Ordinarily, I would assume that someone with The Martha’s resources and staff would hand this one off to a minion, but it’s pretty well documented that The Martha is a hands-on domestic goddess, so I do not doubt for one moment that she did this herself. I, on the other hand, did not polish any silver, as I do not have any.

On the day before Thanksgiving, The Martha baked pies, as I did too. I seriously doubt she took shortcuts and bought pre-made gluten free crusts, but our hearts were in the same place, so I’m not going to judge myself harshly.

Getting to my earlier-mentioned surprise, what I noticed in The Martha’s November is lack of any crafting. Nowhere does it mention that she was knitting scarves for friends, sewing little felted wool toys for her grandchildren, or carving wooden tchotchkes for her staff. I find this odd, because we all know how much The Martha loves to give handmade gifts. Perhaps she did it all earlier in the year and I just didn’t notice it on her calendars?

So that was The Martha’s and The Jen’s Novembers. I think we did a reasonable job of syncing this past month.