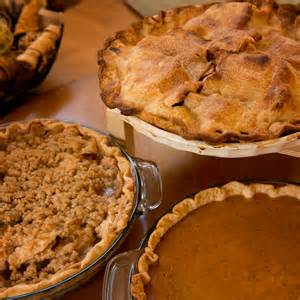 Part of an occasional series about cooking, even though I don’t like to cook.

Ask and ye shall receive.

Here are the four desserts I will be making for my extended family’s Thanksgiving feast, including my notes on how to make them gluten-free, as well as any other tips I’ve gleaned along the way. To keep things simple, I’ve found the recipes online and linked to them, rather than post the recipes all in one massive post.

Butterscotch Meringue Pie - I’ve told you about this one before (here and here), including its long history in my family.

Gluten free fix: The only change needed is the crust. I always buy crusts, which I know is an abomination to some of you, but I know my weaknesses and pie pastry is one of them. Whole Foods has GF crusts for sure, and I believe that Trader Joe’s does as well.

Other notes: You *must* use whole milk in this recipe or else the filling won’t set. If you’re like me and don’t want to make pie pastry, I highly recommend Immaculate Baking Company crusts.

Pumpkin Cheesecake - I’ve told you about this one before too.

Gluten free fix: The graham cracker crumbs in the crust are the only thing that need swapping. Graham is not inherently GF, so use either GF graham crackers or GF ginger snaps (the flavor boost is divine) and crush them in the food processor.

Other notes: To lighten the fat a smidge, you can use lower-fat cream cheese and sour cream. I have not experimented with cutting back on sugar or substituting other ingredients (such as honey, Stevia, or even applesauce).

Apple Crisp - This is an incredibly simple recipe that Pete brought to our marriage. His family has been making it since at least the 70s, if not before.

Gluten free fix: The flour in the crumble needs to be swapped out. Some people who are GF can tolerate oats, but not all can. You can buy GF oats or you can buy GF flours or baking mixes.

Other notes: This is an easy recipe to modify. If I were making this at home for just the four of us, I would completely substitute oats for the flour. (If you want a finer meal, pulse them in the food processor first.)

To reduce sugar, cut back what you put in the crumble. (There’s no sugar in the base.)

For those of you watching your cholesterol, the butter is a little trickier because you need the moisture to bind it all together. I might experiment with using some of my homemade unsweetened applesauce and see how that works.

Cherry Pie with Crumble (gluten free recipe) - This is a new recipe for me this year, so I don’t have any advice to share yet. It was inspired by three things: 1) I love cherry pie, yet have made it only a few times in my lifetime. 2) When I bought the GF pie crust for the butterscotch meringue pie, it came in a two-pack, so why let the other crust go to waste? And, 3) I found some almond flour at the store and immediately thought of how well it would go with cherries.

Gluten free notes: None needed since the recipe is already GF.

Other notes: I’ll be modifying this a bit — using a mixture of GF baking mix and almond flour for the topping, as well as cutting back on the sugar.

So that’s the Thanksgiving dessert report. Yes, I know it’s highly ironic that I’ve chosen to go nearly sugar free this month, but doing so will actually help me resist temptation and not bend on Thanksgiving Day. Okay, I’m not going to resist totally — I’ll choose a couple and have just a bite or two of each. I am human, after all.