Costumes I don’t want to see 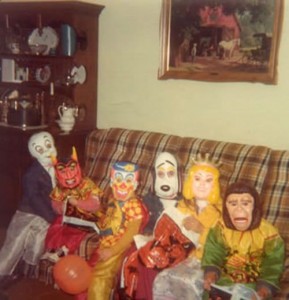 1970s costumes. Back when wearing a non-breathing plastic mask and flame-retardant jumpsuits *made* you whomever you wanted to be. (Photo via Yahoo Images.)

It’s October, which means Halloween is upon us. Thus, it’s time for my annual-ish rant about certain costumes.

In past years, I have ranted about sexy costumes. In fact, a number of bloggers I followrant and yell and shake their fists every year. Still, the numbers of skimpy, revealing costumes that objectify women seem to grow, not lessen.

Instead, let’s turn our reluctant attention to those sexy costumes that in some way sexualize children and teens.

I’m not casting aspersions on the idea of sexy costumes in general. I understand that there are plenty of people who admire them for various reasons. I don’t particularly understand the desire to be objectified, but I don’t think for all women so I won’t question others’ motives.

(But if anyone can explain the appeal of sexy skunks and sexy pizza, please do.)

(Sexy corn on the cob, however, apparently did not sell well. Not even in Nebraska.)

The question is: What, if anything, can we do about this? Let’s brainstorm in the comments.

14 Responses to Costumes I don’t want to see