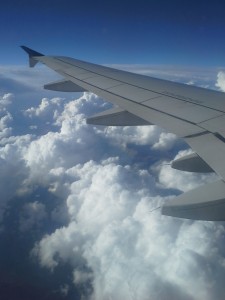 Did yâ€™all think I was done with my travelogue? Pfft. Please. We didnâ€™t fly out on Friday until 4 p.m., which gave us plenty of time for one more wee adventure. Okay, maybe it was less adventure and more exploring.

While itâ€™s still a little early to be looking in earnest, thereâ€™s no reason why we canâ€™t take a general look at whatâ€™s out there. Because, while we know a thing or two or 20 about the various Virginia universities, we donâ€™t know much about the non-Virginia ones. So if weâ€™re in a different city or country anyway, why not just look at their local university?

Which was how we found ourselves exploring McGill in Montreal last summer. And why on Friday we took a detour through Palo Alto to see what Stanford looked like.

And yâ€™all, Stanford is waaaaaay different from what weâ€™re used to. The University of Virginia has orange-red brick, white columns, a lot of neoclassical architecture, and lots and lots of deciduous trees. Stanford, on the other hand, has a lot of this:

Since it was a holiday, everything was closed and there were no campus tours that day. Instead, we just walked around and admired what we saw. The four of us talked generally about university life and what might be important to the girls when they start making decisions about where to apply. I didnâ€™t even get sniffly, although I did mention that if they want to go to school nottoofar from home, we wouldnâ€™t mind at all.

After that, our vacation was pretty much done. We drove to the San Francisco airport and flew off into the sunset.