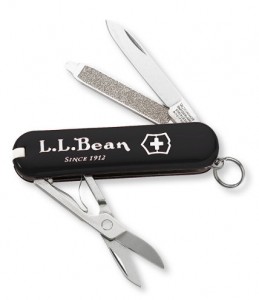 Remember when I tried to smuggle a shiv into Canada’s Parliament building?

Oops, I did it again, according to the TSA.

A few weeks ago, the TSA announced that small pocket knives would once again be allowed on airplanes. Naturally, the new ruling was as confusing as possible — knives of this size and width, but not these because of blah, blah, blah…

All four of us here in Jenworld adore Swiss Army knives. They’re just so useful. We all have them in varying sizes — mine was the wee one in the photo, while my dear spouse and daughters have larger, more complicated knives that would have gotten MacGyver out of any situation. When we travel, our knives come in handy — you never know when you’re going to need to file metal or cut down a tree — so we stick them in our checked luggage so that we can have them whenever a situation requiring a knife, scissors, screwdriver, file tweezers, plastic toothpick, etc. comes up.

I was delighted by the TSA’s arbitrary ruling and thus it was that I did not bother to take my knife out of my bag when we flew from Washington Dulles to Las Vegas on March 30. We went through security with no problem.

On our return trip on Tuesday, however, I went through the metal detector, turned to my left to grab my carry-on from the conveyor belt, and saw the TSA employee squinting at my bag on the x-ray screen. Pete’s bag got flagged too.

So we stood there barefoot — oh, I do have some things to say about the shoe policy, just give me a moment to finish this first rant — while a fresh-faced young man went through our stuff. Pete had accidentally left an unopened can of Diet Coke in his bag and it was promptly trashed.

And then the guy told me I couldn’t take my Swiss Army knife onto the plane. You see, the new regulation doesn’t go into effect until April 25, so according to the TSA, those little suckers are still highly dangerous on planes until the 24th. On the 25th, however, they’ll be safe again.

I would have liked to have debated this matter with the airport personnel but didn’t because 1) they’re just doing their jobs and have no say in the matter and 2) we all know how bad things can get if you do challenge the TSA’s authority. (Strip searches, missed planes, arrests.) So I relinquished my notweapon, got my shoes and bag back, and got heck out of there.

I hate having to accept something badly thought-out and poorly executed and I especially hate it when I have to accept it out of fear that a faceless entity will seriously eff up my day. This is the thought that runs through my mind every time I have to take my shoes off in an American airport — but I get to keep them on whenever I go through an airport in another country. One jackhole smuggles a bomb onto a plane and we’re all barefoot and gagging at someone’s foot odor on a steaming summer afternoon in airport security. I still can’t believe the TSA didn’t find a way to make us hand over our underwear after that guy tried to blow up a plane with the contents of his tighty whities. And I am waiting for the day that some woman attempts to stab someone with the underwire from her bra, because the next thing you know, those of us with mammaries will be standing in the security line barefoot and hanging low.

So now I am sans couteau. Luckily, National Jen Day is coming up in a few weeks and Pete has promised to replace my Swiss Army knife. I’m guessing I’ll be getting an upgrade, as he has been mocking my wee weapon for years.

That’s not a knife. THAT’s a knife.

Thus endeth my tales of Spring Break travels. I’ll be back on Monday with more of my usual inanity and randomness.