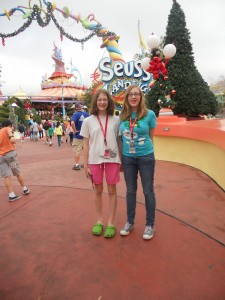 I take a photo of the girls in this spot every time we visit.

“Insanity: doing the same thing over and over again and expecting different results.” ~ Albert Einstein

Einstein was a wise person. I,  however, am not.

My family loves amusement parks. I do not. While I used to be able to ride all the rides, now I can’t, as they all make me feel dizzy and sick. It’s actually gotten worse in the past few years, so now there’s very little I can ride, as I get off staggering and queasy.

Nevertheless, we have been to a number of amusement parks over the course of our travels. As a result, I know far more about those places than I would like to and, by association, have seen far more humanity than I care to see.

Still, if I’m going to go to an amusement park, there are a few that I don’t hate as much as others and one of those is Universal Studios in Orlando. It’s a really nice park with great theming and interesting attractions. And with the opening of the Wizarding World of Harry Potter, as a huge fan of all things Harry, I’ve actually been eager to visit.

We got off the cruise ship bright and early on Thursday the 3rd and headed immediately to Orlando. By late morning, we were there, in the thick of it. And it was really thick. The place was wall to wall people. And the Harry Potter area was the worst. It was so crowded, in fact, that entrance to that part of the park was being limited, as they were at capacity. So we got our timed tickets and waited to enter. 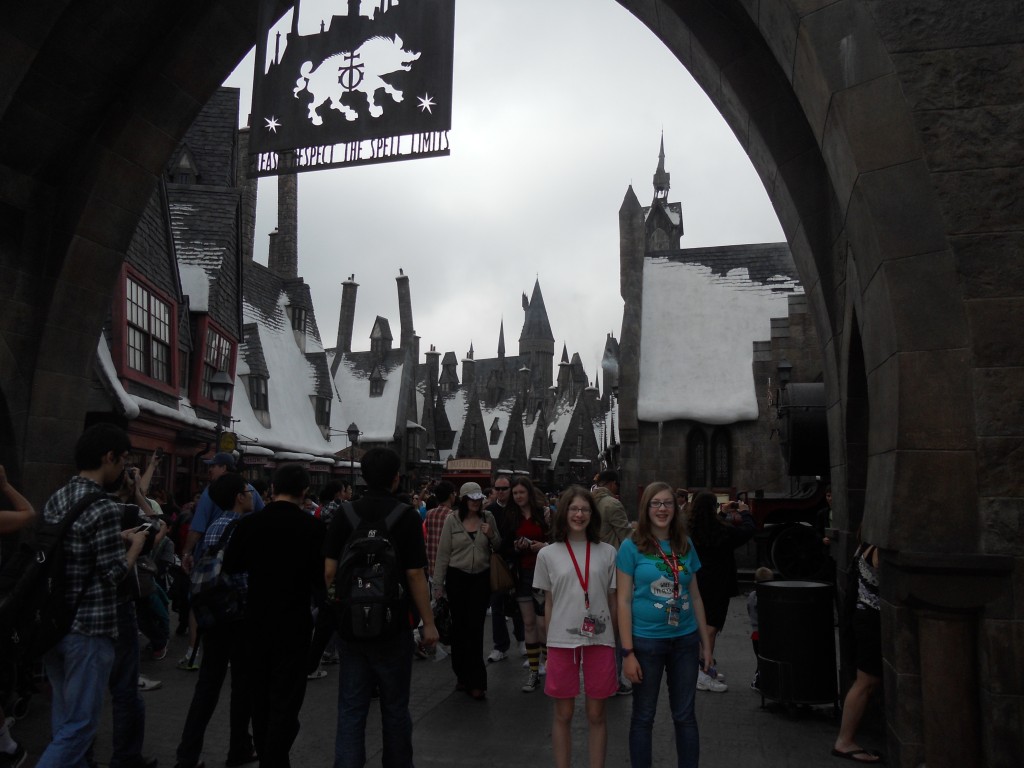 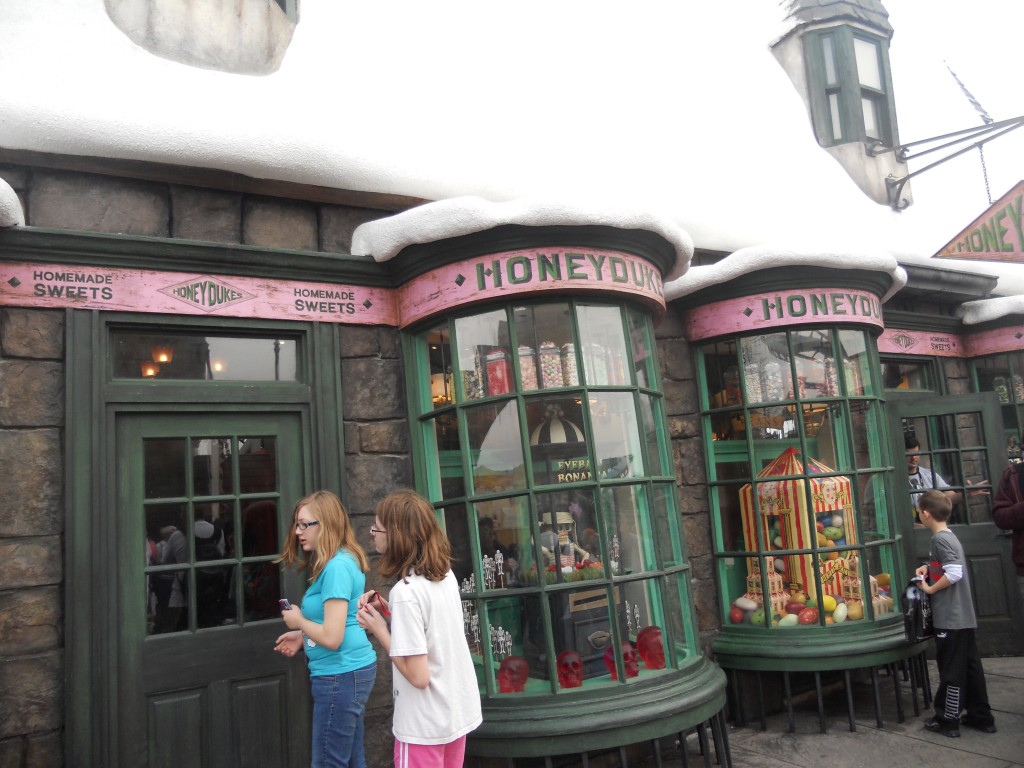 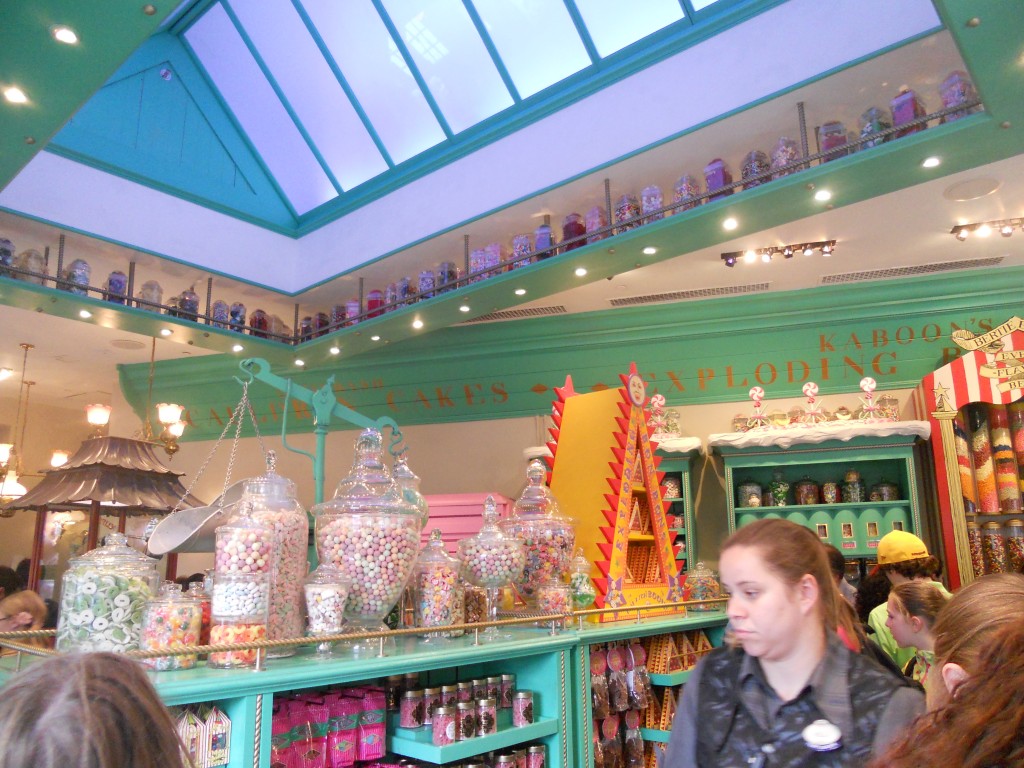 Inside Honeyduke's. Yes, it truly was magical. 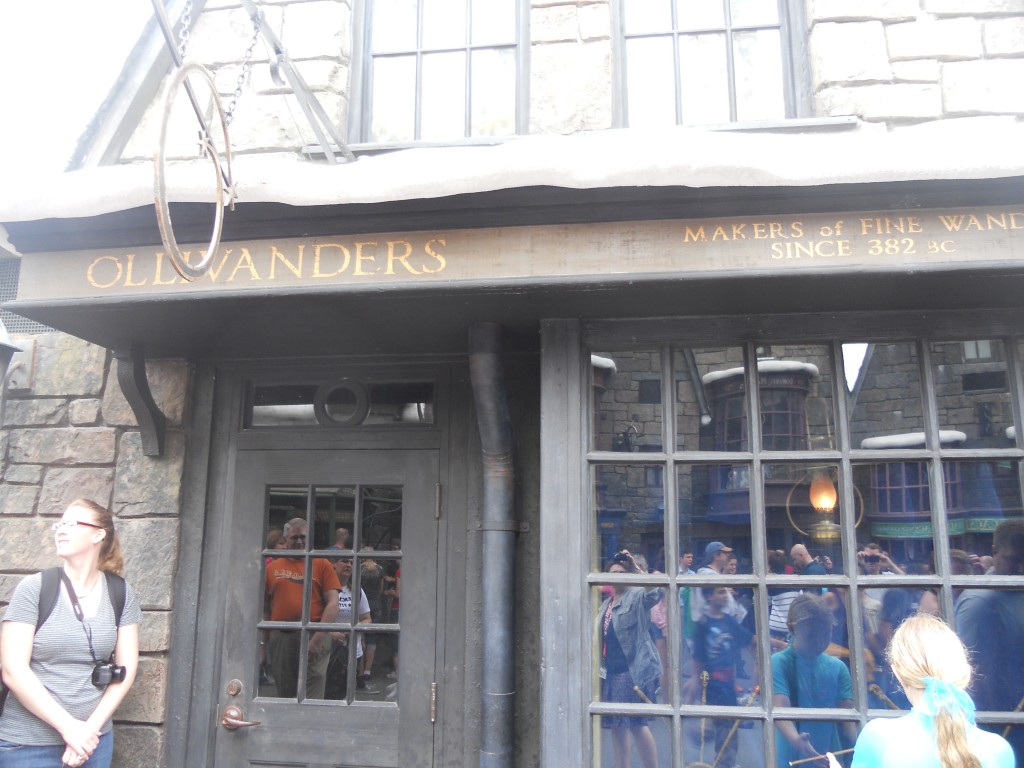 Ollivander's wand shop. You couldn't just walk in. Oh no, there was a line. Wrapped around the building. And it was a 45 minute wait, minimum. We decided to skip it.

We did try butter beer and pumpkin juice and both were quite good. The butter beer was very foamy and frothy and tasted like an overly sweet creme soda. The pumpkin juice exceeded my expectations and I might just have to make some. That stuff was tasty. 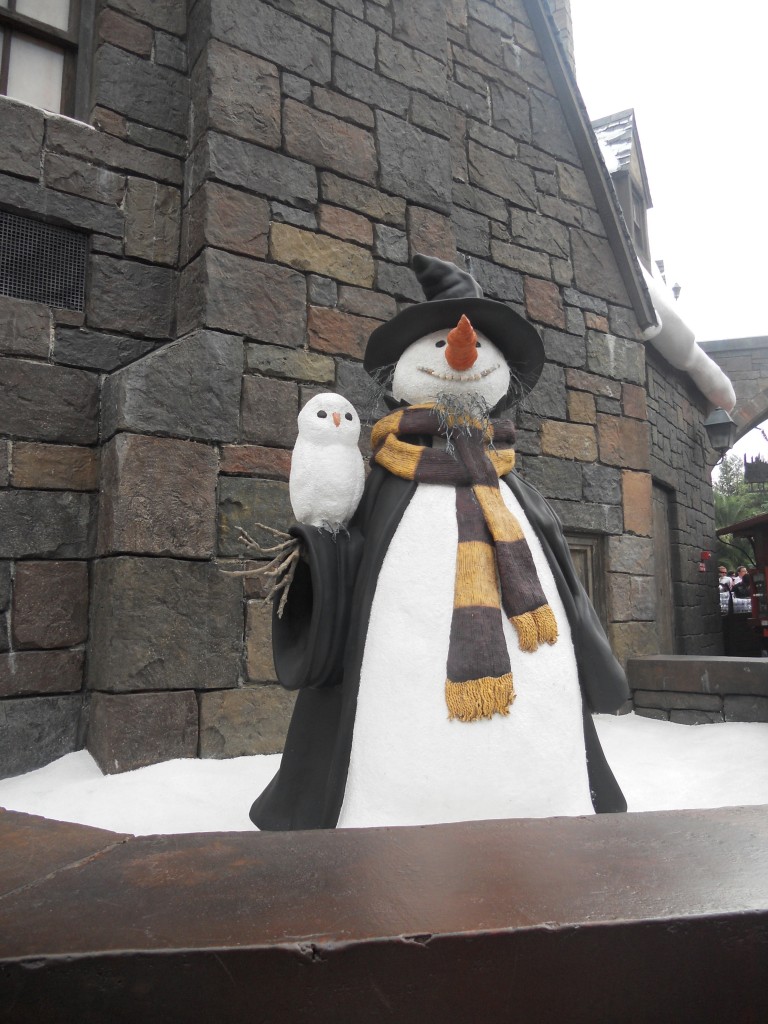 All of the rides at Universal were packed, most with lines that were an hour or (more often) two or more hours long. We were staying in one of the Universal resorts, which meant that as registered guests we could skip to the front of the line for most rides. But there was one ride that didn’t offer that option and it was one that we all wanted to check out: Harry Potter and the Forbidden Journey. On Thursday, the average wait time was 150 minutes. No way. No. Freaking. Way.

Luckily, there was a work-around, but it sucked a little bit. Because we were staying in an on-site resort, we could get into the park an hour before the official opening time. Which is how we found ourselves at the gate on Friday morning at 8 a.m.

Allow me to set the scene for you: It was, as I just mentioned, eight of the o’clock in the ay-em. My family does not move fast in the mornings. So people were a bit groggy. And we were hungry, as there was no time to eat before going into the park and standing in line for The Ride. And that also meant there was no time for coffee.

Oh, and it was raining and cool. Not heavy rain, but it was still a bit more than just a drizzle.

Do this math: Amusement park + no breakfast + no coffee + rain + a long line = it’s a wonder I didn’t kill someone.

55 minutes later, we were getting on the ride. And I knew as soon as we set off that it was a terrible mistake for me to be on it.

Don’t get me wrong, the ride is amazing. If you like rides, you’ll love this one. The special effects were spectacular. But I was thrown about and spun and lifted and jostled and thrown more, all with visuals right in my face that made it appear as I was on a dragon swooping over a Scottish loch or racing about a Quidditch field on a zooming broomstick.  It was like I was on a roller coaster. I hate roller coasters.

I closed my eyes and squinted at the view every now and then so that I could get a sense of the ride’s underlying story, but honestly? I can’t really tell you what was going on. Only that we were riding dragons over a Scottish loch, that we were playing Quidditch, and then some other stuff that I’ve already blocked from my brain.

When we got off four minutes later, I was actually staggering around all drunk-like and Pete had to lend me an arm so that I could steady myself and walk out of there upright.

The ride’s exit dumped us straight into the gift shop, which was armpit to armpit with people. Oy. We had promised the girls some shopping in Harry Potter World, so I managed that while Pete escaped the crowds. They got t-shirts in one shop, then we went to Honeyduke’s and Zonko’s, where they got wizarding candy and other fun stuff. They were having a great time, which made me happy, because we were there for them.

And then FINALLY we got breakfast at a pub in Harry Potter land, where we stood in a long line for an overpriced mediocre breakfast. And I got my coffee, thank you sweet baby Jesus. I could almost hear the angels singing from on high as I got that first sip into my system.

After that, we left Harry Potter and his wizarding pals and headed to another part of the park. Thank goodness, because by that point, my wallet felt like it was a hemophiliac that had been pushed off a cliff and landed on a pile of jagged rocks. 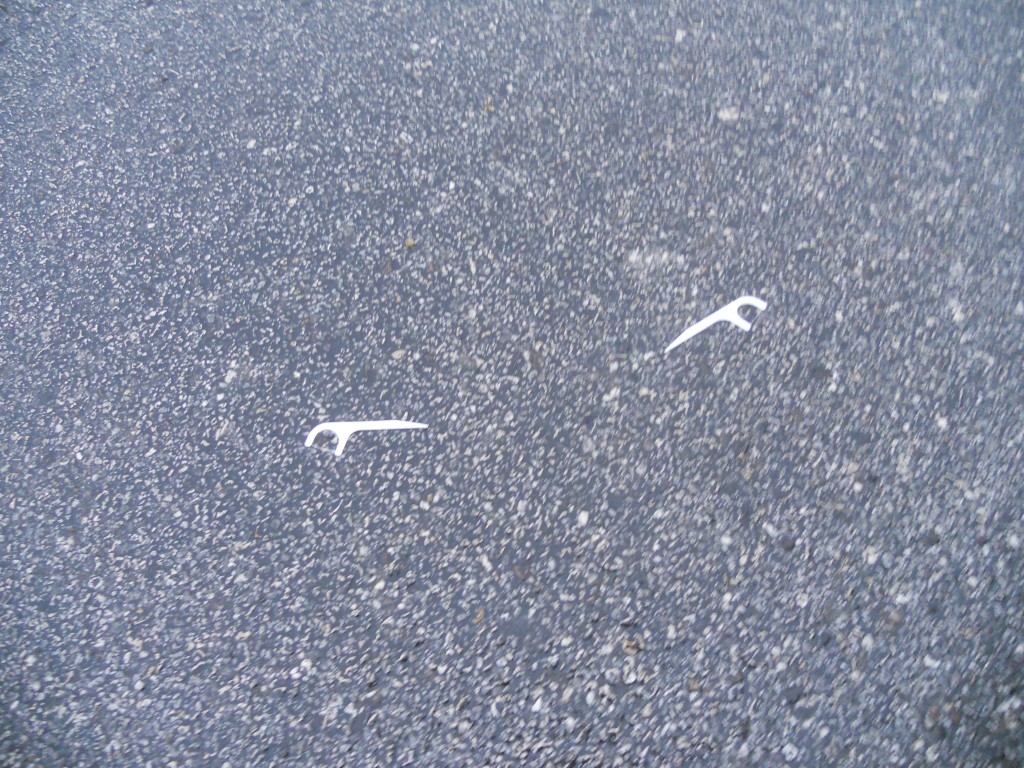 Dental floss picks. In the parking lot. Which means that someone was using them outside of the bathroom (or possibly just carrying them around). Either way, I was disgusted. What is wrong with people?

There comes a moment in every amusement park adventure when I cross the line from having fun or even just merely tolerating everything to full on I am done with this shit. If we’re lucky, it’s well into a day’s visit, say, after lunch. Alas, my moment occurred as I was in the Harry Potter gift shop. It was 9:20 a.m.

After we left Harry Potter, I gave up on rides and started waiting for my peeps at the exits. Luckily, I had been smart and packed entertainment: 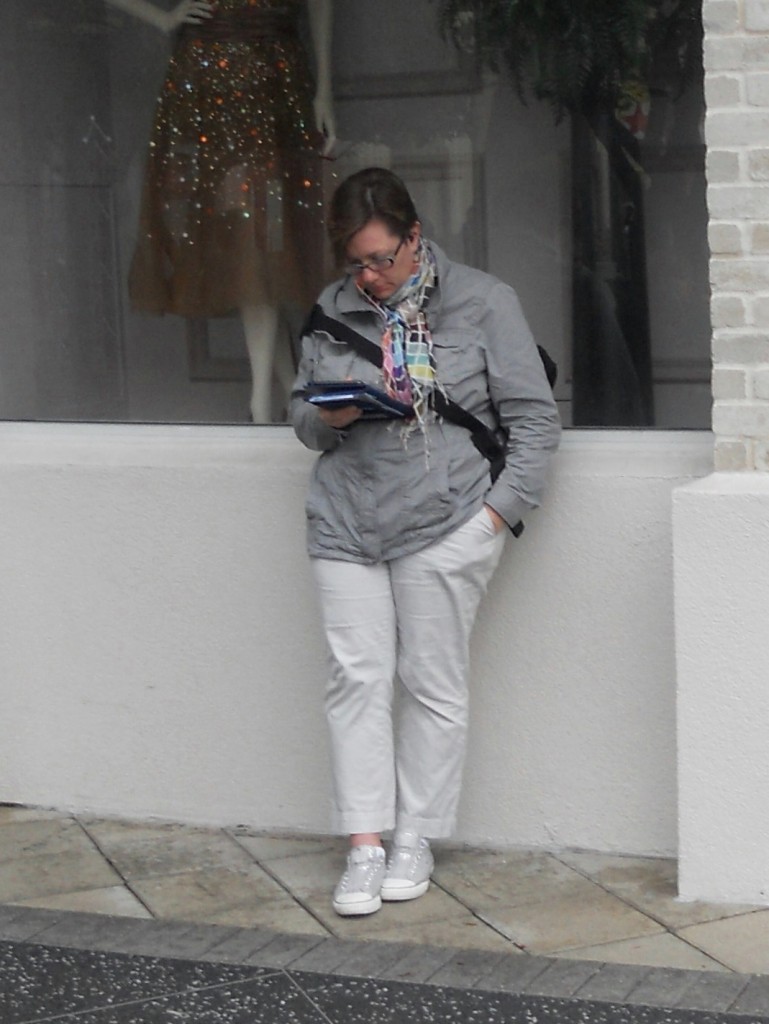 Reading my Nook AND listening to my iPod. I was taking no chances on my fellow humans' safety and well-being when around me.

I also did a fair amount of people watching. 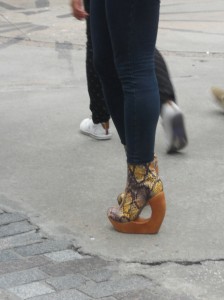 And then finally — FINALLY — we got in the car and left Orlando. We drove north, through a little bit of Florida, a lot of Georgia, and then South Carolina. We pushed hard and knocked off half the distance from Orlando to Jenworld on Friday afternoon and evening, spent the night in a hotel in the middle of nowhere, then got up on Saturday and drove the rest of the way home. We didn’t even stop for meals, just quick pit stops for gas and gas station food. Many nutritional rules were bent during that 24 hours, I tell you.

So that’s the last installment of our winter break adventure. We had Saturday evening and Sunday to empty our suitcases, brush away the sand, push through eight loads of laundry, restock the fridge, and remember what it’s like to have to go to bed at a reasonable hour and wake up at the unreasonable hour of o’dark thirty.