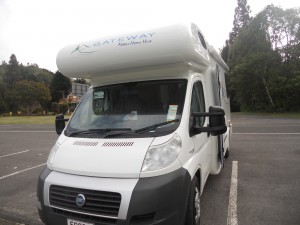 G’day mates. We went offline again for a few days, but I’m not only back online, I’m back home. I’m working on a few different trip-related blog posts for you and thought I’d finish up our New Zealand adventures first. Since some of you have asked me about specifics of camping — or “glamping” as my friend Amy called it, saying that we were definitely NOT roughing it — I thought I’d do a post on that.

Camping was a totally new thing for us. Pete did it some when he was a kid, but has not done any in the past 20 years. I went tent-camping a couple of times when I was a kid and I can promise you that tent-camping is not going to be a part of my life ever again — and not just because that nylon is not enough protection between me and nature. Consequently, my girls have never been camping, other than a couple of overnights that Grace has done in a friend’s backyard.

We’ve been intrigued by campers for years though, so I wasn’t totally surprised when Pete suggested that we give camper-camping a try in New Zealand. It’s hugely popular there.

When we flew into Auckland, someone from the camper place was there to pick us up. He drove us back to their camper HQ, gave us a short orientation of our new borrowed wheels, and then gave us the keys. Honestly, it was like when Grace was born: I can’t believe anyone trusted me with something like that. I had no idea what I was doing.

Pete did his research and looked at different camper outfitters, as well as different types of campers, including different sizes and ones that were winterized and/or could go a day or two without being hooked up to water and electricity. Our camper was nicely insulated and we had the capacity to go “freedom camping” (no need for electrical/water hook-ups), although I never felt brave enough to spend the night away from campgrounds. 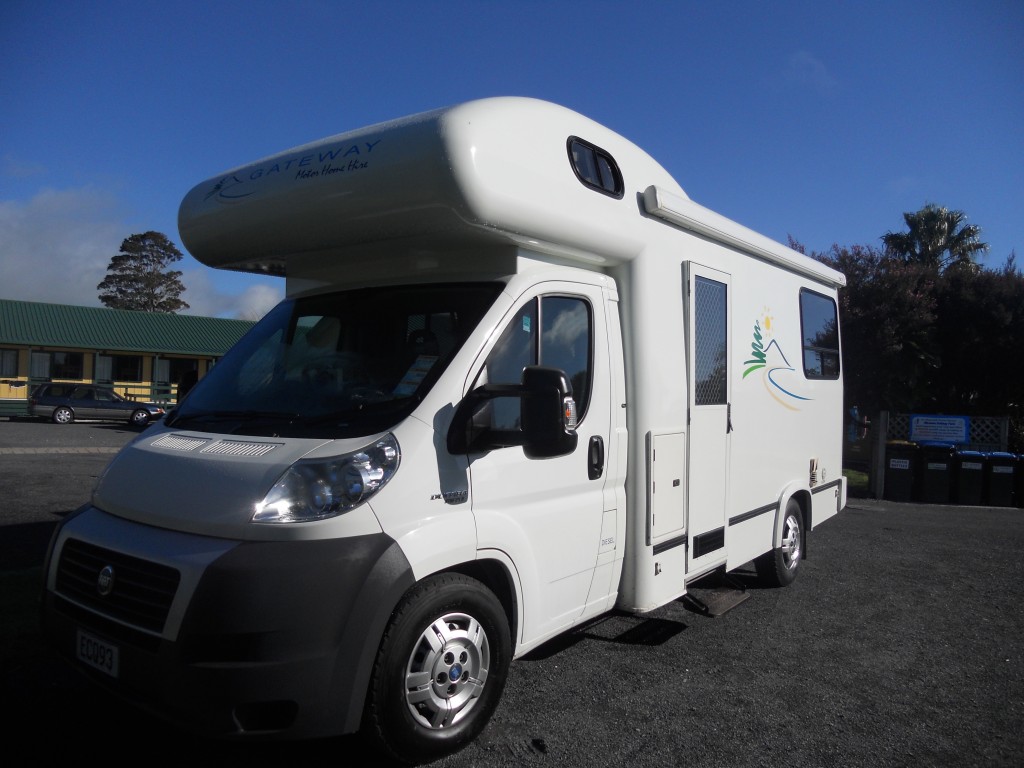 When you walked in, the driving area was on the left, the passenger seats were straight ahead, with the bathroom just behind them, and the kitchen and eating area were to the right. 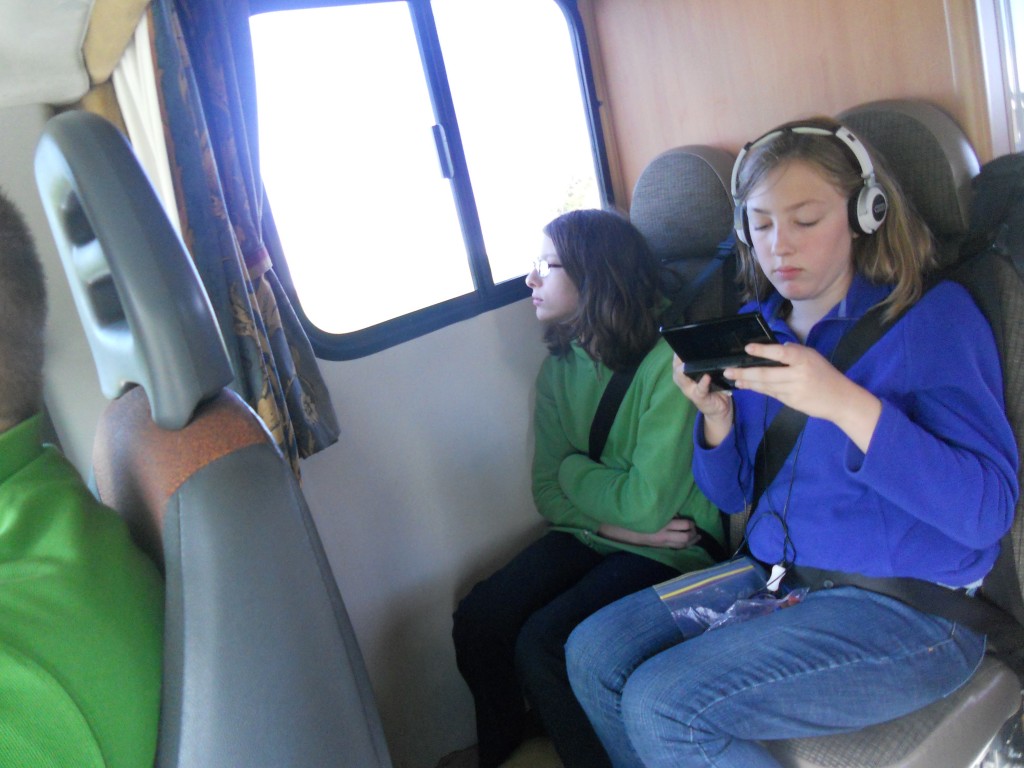 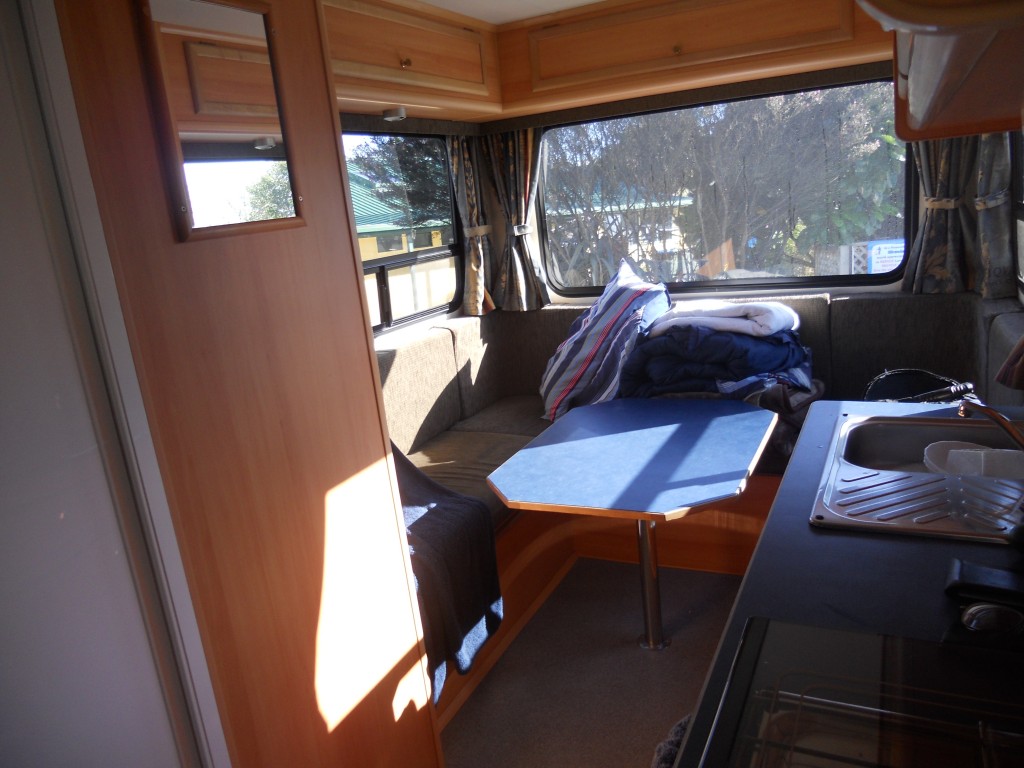 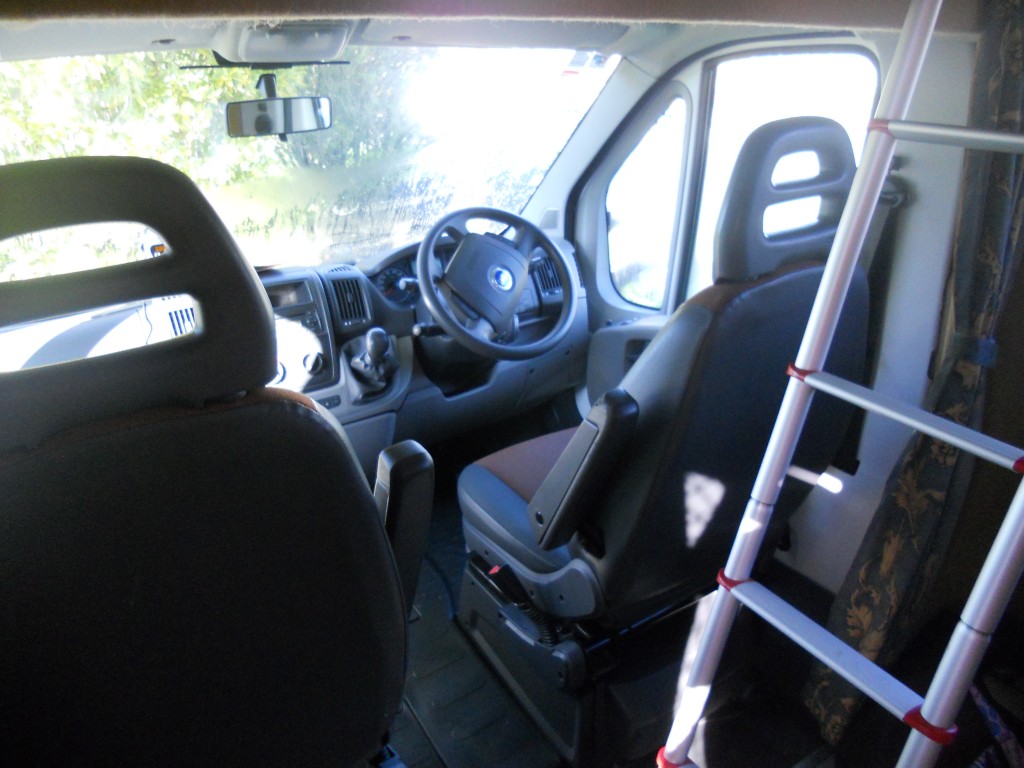 The girls slept in the bunk over the front of the camper: 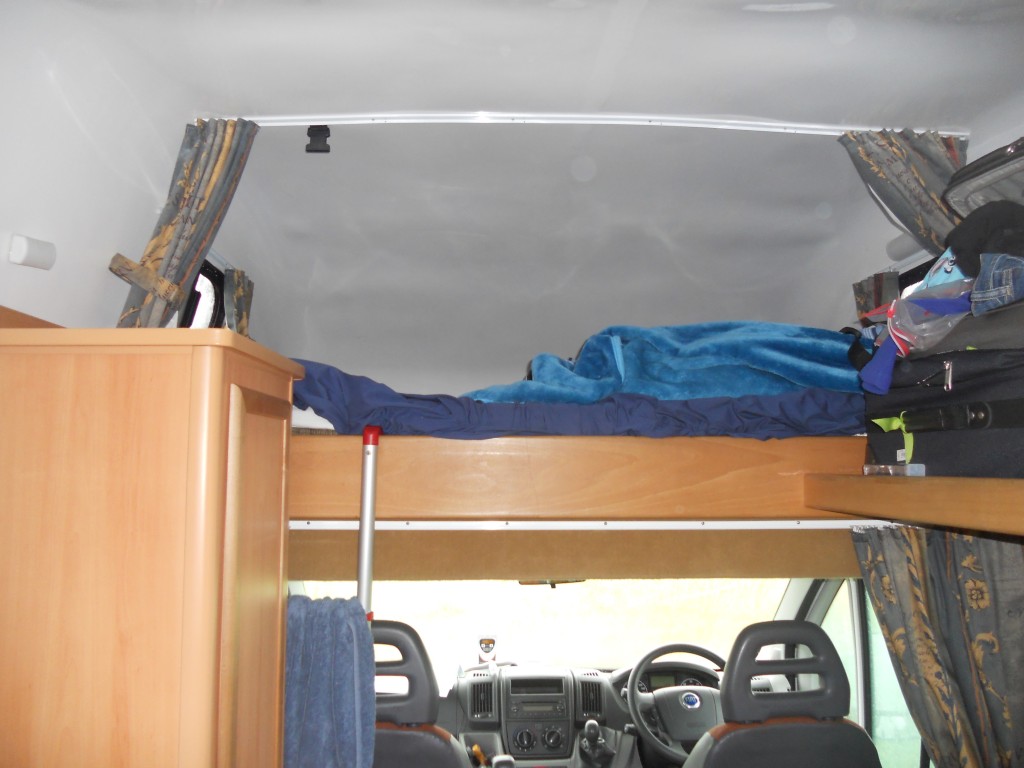 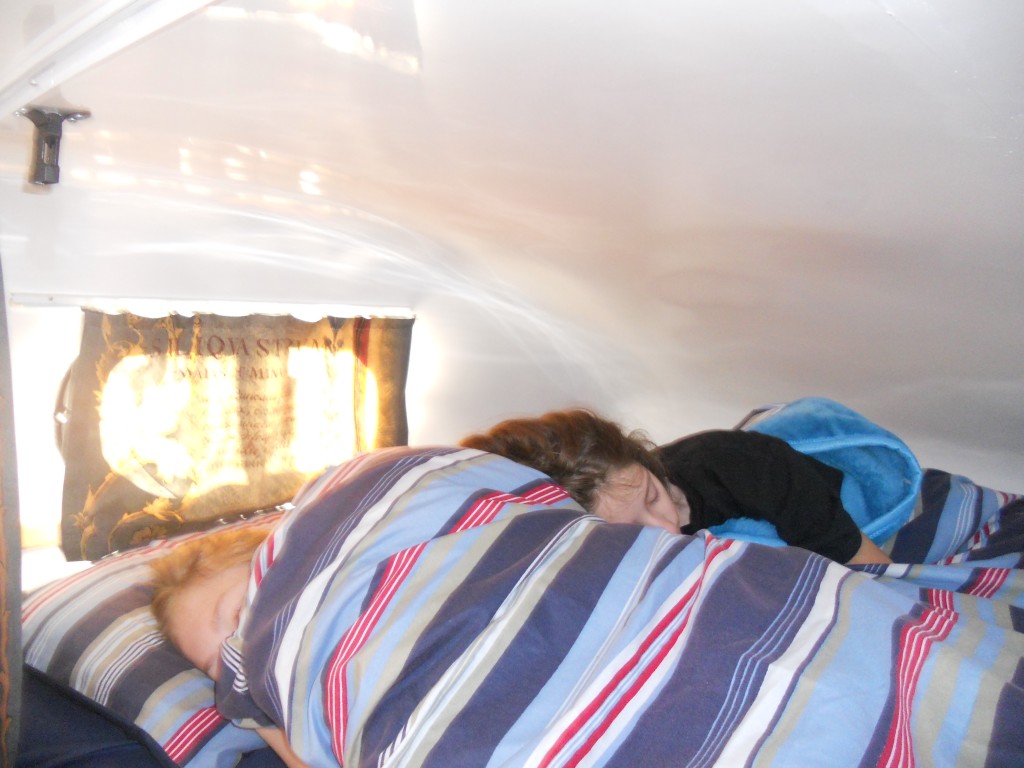 When not in use, the ladder to the bunk was stowed behind the front passenger’s seat.

Pete and I slept in the back, where the table and benches converted to a bed: 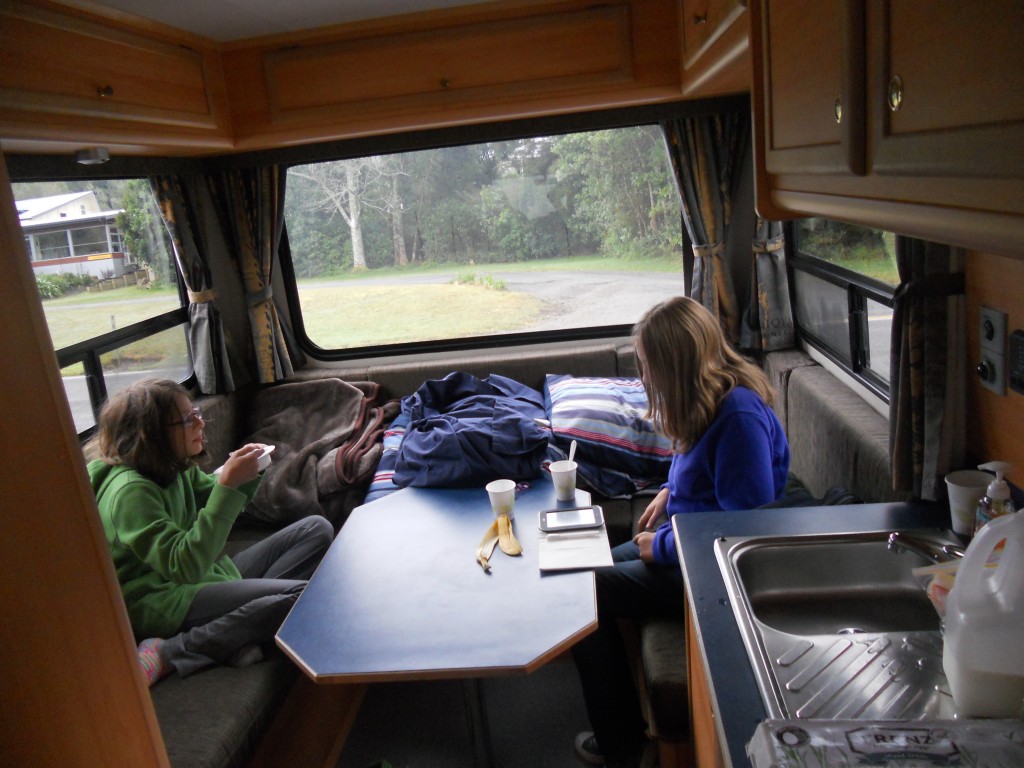 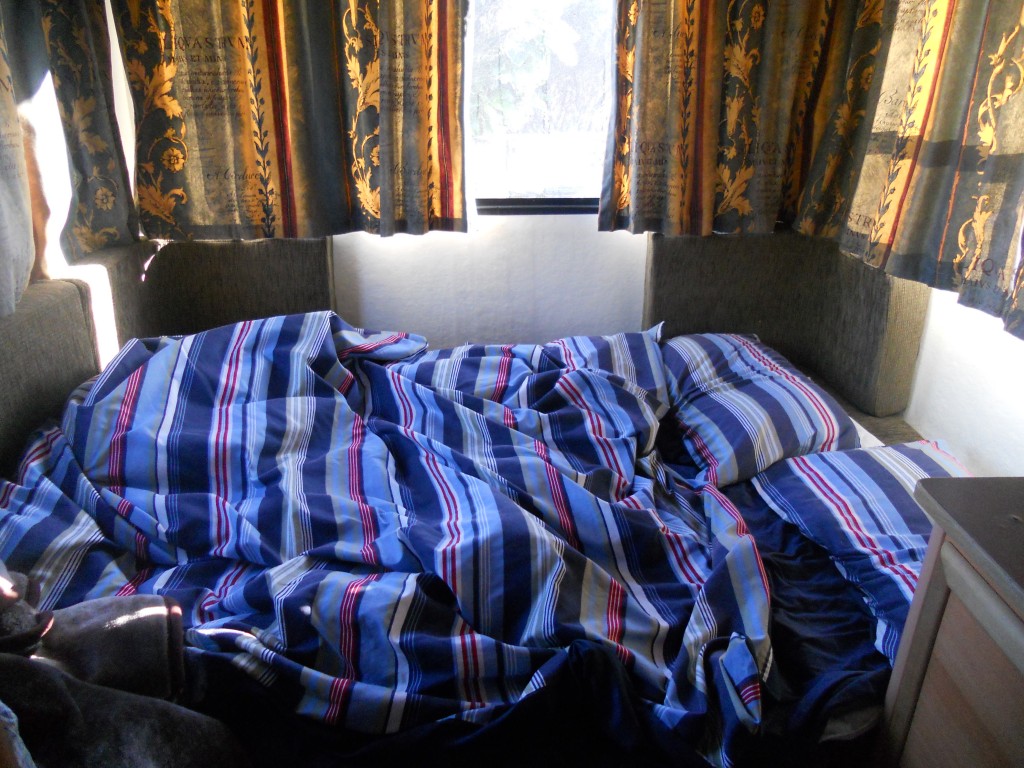 Both sleeping arrangements have their pros and cons. With the girls’ bunk, we made it up once and that was that; whereas with ours, we had to put everything away every morning and remake it every night. By the third night, I was sick of it and by the fifth and final night, I was considering suggesting that we each squeeze ourselves onto the too-short and too-narrow bench seats. On the other hand, I didn’t have to climb up and down a ladder to get in bed and I didn’t have to sleep in a cozy cave with the camper roof just inches from my face. In both cases, one person had to climb over another person to get out of bed, whether.

The bathroom was teeny, about 3′ x 3′. The toilet was on the right and the sink was on the left. The shower was the sink faucet, which could be pulled up and hooked to the wall above  your head. 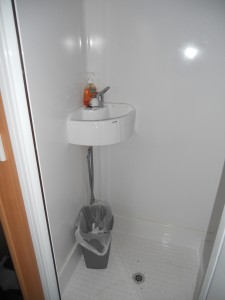 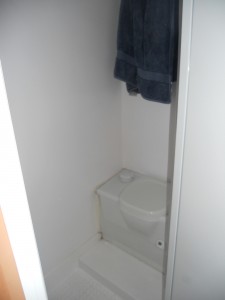 Pretty early on, we all realized that the bathroom was going to be limited mostly to washing hands, brushing teeth, peeing, and emergency can’t wait any longer #2 situtations. (I realize that’s TMI, but I know you’re wondering about it.) We were all quite conscious of the fact that everything we did in there had to be emptied out the next morning, whether it was liquids or solids. It’s my understanding that campgrounds in the U.S. have hoses that you stick into the appropriate place and which suck out the contents of the “honey pot” in such a way that you don’t ever have to see the contents. In New Zealand, you have to physically remove the container, open it up, and empty it at the dump stations, followed by pouring in some sort of chemical to neutralize the odors. Pete handled that chore bravely and magnificently every single day. This is yet another reason why I love that man so very much.

We never actually used the shower function. Hot water in a camper is more precious and valuable than gold, emeralds, or baby unicorns. You have to make sure the water tank is full, turn on the propane to heat the water, wait for the water to heat up, then be VERY efficient with your showering. And then the “gray water” tank has to be emptied, the water tanks refilled, and the propane would have to heat the new water for 30 minutes before someone else could have a shower.

Instead, we showered at the campgrounds.  Those showers* turned out to be very nice — super clean, with lots of elbow room, and TONS of hot water. Usually, each shower stall had an outer stall for hanging up your clothes and towels and then an inner stall where you showered. Showers were usually timed at 5-10 minutes before the hot water cut off, which was more than enough time, especially if you decided that shaving is not essential.

*Note to my mother: YES, we wore Crocs and did not go in there barefoot.

Jenwheeled was very cozy, especially for four people, but there was plenty of storage space, including built-in cabinets for clothes, blankets, and towels. Once we figured out what to do with our suitcases (two of them, nested inside each other and stowed out of the way), we were able to put our stuff away and move around inside pretty well.

We had different kinds of power to make everything work — a battery (separate from the engine battery) for some of the lights and the fridge, electricity (once we were plugged in at a campground) for the rest of the lights and the microwave, and propane for the stove and broiler, hot water, and heat. Instead of using the propane heat, we used a small electric heater that kept us warm at night.

I’m not sure how much water the tanks (one for clean water and one for the toilet) held, but we were hyper cautious and never came close to running out.

When we pulled into the campgrounds at night, we had a variety of tasks to do so that we could get settled in, including plugging in the electricity, turning on the propane for hot water, opening the vent in the bathroom (important), and so on.

Breaking camp in the morning was more involved. In fact, on our first morning, we dictated a list and Grace wrote it down: 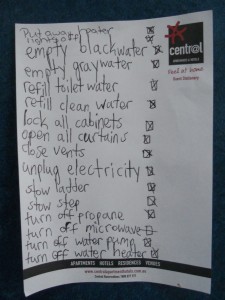 The first morning, dealing with emptying the gray and black water tanks* then refilling the water tanks, putting away the electrical cord, etc. took a long time. It got a little faster each morning, but still took a solid 30-45 minutes, depending on where the water faucet was located on our campsite (in other words, did we have to move the camper around to fill tanks?) and where the “dump sites” were located in the campgrounds.

* Gray water was sink water, black water** was from the toilet.

** Pete and I had a Doobie Brothers ear worm for days.

Jenwheeled came with just about everything we could possibly need, including a full complement of kitchen equipment (dishes, pots, utensils, a bottle opener, and even a colander), linens, cleaning supplies, and even folding chairs, in case it was warm enough to sit outside.

The one major flaw was the serious lack of towel hanging space.  There was one teeny tiny towel bar in the bathroom, which was wide enough for a hand towel. Beyond that, there was no place to hang wet towels for four people. Believe me when I tell you, that was a recurring issue several times every day and I bitched about it almost hourly. It would have been so easy to hang some hooks on the wall outside the bathroom and then sew a little hanging loop on each towel. Instead, we found ourselves draping towels over the ladder to the girls’ sleeping loft, across seats, and anywhere else we could find a spot and then moving towels around as we needed to use different spaces.

But otherwise, this little adventure was a lot of fun. We’re talking about camper-camping again, but I wouldn’t say that we’re so keen on it that we’d consider buying a camper. This was all Pete’s idea and while I enjoyed it, I’m not totally sold on it yet. Three days was great fun, but by the fourth day I was dreaming of hotels, and by the fifth day I was DONE.

So, we landed in New Zealand on Thursday the 9th and left on Tuesday the 14th. After turning in the camper, we went to the airport and flew back to Sydney, where we had our fifth and final segment of our big vacation Down Under.